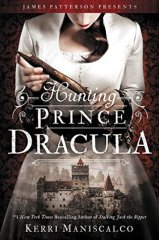 “Perhaps it was time for fathers to teach their sons how to behave around young women. They were not born superior, no matter how society falsely conditioned them. We were all equals here.”

In this New York Times bestselling sequel to Kerri Maniscalco’s haunting #1 debut Stalking Jack the Ripper, bizarre murders are discovered in the castle of Prince Vlad the Impaler, otherwise known as Dracula. Could it be a copycat killer…or has the depraved prince been brought back to life?

Following the grief and horror of her discovery of Jack the Ripper’s true identity, Audrey Rose Wadsworth has no choice but to flee London and its memories. Together with the arrogant yet charming Thomas Cresswell, she journeys to the dark heart of Romania, home to one of Europe’s best schools of forensic medicine…and to another notorious killer, Vlad the Impaler, whose thirst for blood became legend.

But her life’s dream is soon tainted by blood-soaked discoveries in the halls of the school’s forbidding castle, and Audrey Rose is compelled to investigate the strangely familiar murders. What she finds brings all her terrifying fears to life once again.

Oh. WHY isn’t the next book out yet?!
I’m so glad I decided to pick these books up, Audrey Rose and Thomas have THE best chemistry.
I also love that it’s mostly words and looks with one or two touches here and there but it’s still as powerful as the ones who can’t keep their hands to themselves. It’s just so well done!

The writing was a lot better in this one but I still can’t decide if the problem I had at the start of the first one was due to it being a debut novel or if it was just how the character started off.
I also like that it didn’t spoil book 1! The events of book 1 were brushed upon here and there but no one ever came out and said exactly what happened, which is something I found impressive. So if you accidentally read book 2 first, you’ll know all about Thomas and Audrey but you wont know whodunit!

We learn a lot more about Thomas in this book and we even meet his sister! We learn a lot about her too, incidentally…
Audrey and Thomas head off to Romania to attend forensic school, because why not? It’s December, a few weeks after book 1 and the school is housed in Dracula’s castle – because where else would you have a forensic school in Romania?!

I ended up liking this book more than the first one, which is rare. I don’t often prefer book 2! There are 4 books in this series however so book 3 has ample room to frustrate me.
Audrey seems to have made a decision on what type of person she wants to be and Thomas is quite thrilled. I look forward to them continuing their adventures on the boat to America.