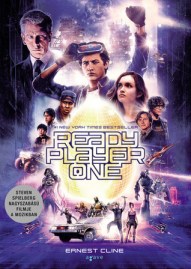 “I was watching a collection of vintage ’80s cereal commercials when I paused to wonder why cereal manufacturers no longer included toy prizes inside every box. It was a tragedy, in my opinion. Another sign that civilisation was going straight down the tubes.”

Like most of humanity, Wade Watts escapes his grim surroundings by spending his waking hours jacked into the OASIS, a sprawling virtual utopia that lets you be anything you want to be, a place where you can live and play and fall in love on any of ten thousand planets.

And like most of humanity, Wade dreams of being the one to discover the ultimate lottery ticket that lies concealed within this virtual world. For somewhere inside this giant networked playground, OASIS creator James Halliday has hidden a series of fiendish puzzles that will yield massive fortune — and remarkable power — to whoever can unlock them.

For years, millions have struggled fruitlessly to attain this prize, knowing only that Halliday’s riddles are based in the pop culture he loved — that of the late twentieth century. And for years, millions have found in this quest another means of escape, retreating into happy, obsessive study of Halliday’s icons. Like many of his contemporaries, Wade is as comfortable debating the finer points of John Hughes’s oeuvre, playing Pac-Man, or reciting Devo lyrics as he is scrounging power to run his OASIS rig.

And then Wade stumbles upon the first puzzle.

Suddenly the whole world is watching, and thousands of competitors join the hunt — among them certain powerful players who are willing to commit very real murder to beat Wade to this prize. Now the only way for Wade to survive and preserve everything he knows is to win. But to do so, he may have to leave behind his oh-so-perfect virtual existence and face up to life — and love — in the real world he’s always been so desperate to escape.

A world at stake.
A quest for the ultimate prize.
Are you ready?

I have some mixed feelings about this book.
The story as a whole was fantastic. A world set in an 80′s obsessed video game can’t be anything but, however this book was quite obviously written by a man. That isn’t to say that I think he didn’t try, I think he perhaps tried quite well, he just seemed unable to avoid several male-author cliches. I hope he fixes this for book 2 though! That would be one epic book.
There were so many little things that got on my nerves that there was only one truly epic way to reap redemption and I’m so pleased to announce that Ernest delivered.

Much of this pop culture was over my head. We were more 90′s children and were restrained by my brothers whims, not just with TV but also with entertainment. Our game platform of choice was the gameboy (and let me tell you, that name annoyed me immensely.) and all future incarnations there of.
Some was familiar to me from more recent interactions with them and I have to say I’m pretty non-plused there was no mention of Sailor Moon! Especially with all the crystal key business, but I guess it’s obvious why not.

We spend the whole time with Wade/Parzival as he’s the one telling us the story. We really don’t get to see much of many others because we’re in his head the whole time and all we get are is opinions and views. He goes through some pretty…interesting developments and it’s pretty easy to say that none of them are the same people they were at the start.
A lot of his development is quite close to wish fulfilment, almost too ‘easy’ and he’s still pretty stupid sometimes, but then this IS a video game world.
One thing is unforgivable however. you do NOT acquire a firefly-class spaceship called Kaylee and RENAME IT!!!!
How dare you.

I did really enjoy this book and if you can overlook/laugh at the obviously frustrating bits I certainly recommend it.

The thing with Artemis frustrated me on many fronts, but her ‘terrible secret’ was so male-author it would have been hilarious if I hadn’t felt so let down.