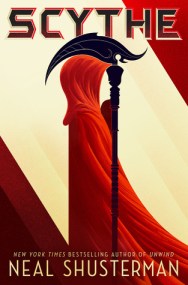 “My greatest wish for humanity is not for peace or comfort or joy. It is that we all still die a little inside every time we witness the death of another. For only the pain of empathy will keep us human. There’s no version of God that can help us if we ever lose that.”

Original review can be found HERE.

A world with no hunger, no disease, no war, no misery. Humanity has conquered all those things, and has even conquered death. Now scythes are the only ones who can end life—and they are commanded to do so, in order to keep the size of the population under control.

Citra and Rowan are chosen to apprentice to a scythe—a role that neither wants. These teens must master the “art” of taking life, knowing that the consequence of failure could mean losing their own.

I first read this March/April 2017. I knew I’d need to re-read it for book 2, but when I was offered it as part of a deal on audible, I figured why not! That, by the way, was a fantastic choice because the narrator - Greg Tremblay - was fantastic! So fantastic in fact that I just HAD to keep going with the audio books!
(with a gap of one book in the middle, to give me a chance to write some kind of review cause it’s July and I’m way more behind than usual…)

So, even though I knew I’d need to re-read this, I was still pretty confident about my memory of the plot. Oh boy was I wrong, I completely forgot a MASSIVE plot point that was central to book 2. Honestly, it’s hilarious. And horrifying.
[The plot point central to book 2, not my memory.,,,]

I certainly enjoyed the book more the second time, though I’m not sure if it’s because of the narrator’s way of reading it, or if it was because I knew I’d enjoyed it before – certainly it wasn’t because I knew what happened because clearly I didn’t!

I think that Rowan is my favourite character. [though at this point I've now listened to book 2 and I can't confirm if it was the second read of book 1 or the continuation of their story that defined this...] Citra was a little frustrating, but I can’t say if this is because of who she was or just the way she was written.
Both of these characters have fantastic potential though and I’m looking forward to following them through to the end.

It’s more of a slow build book, but don’t let that fool you because it’s still unbelieveably facinating. The world this takes place in is so well built you can’t help but need to know more.
I would definitely recommend this book! Especially, the audio book.