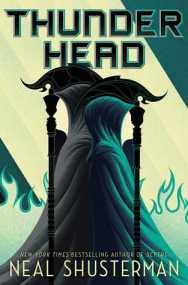 “Because rain is the closest thing I have to tears.”

Rowan has gone rogue, and has taken it upon himself to put the Scythedom through a trial by fire. Literally. In the year since Winter Conclave, he has gone off-grid, and has been striking out against corrupt scythes—not only in MidMerica, but across the entire continent. He is a dark folk hero now—“Scythe Lucifer”—a vigilante taking down corrupt scythes in flames.

Citra, now a junior scythe under Scythe Curie, sees the corruption and wants to help change it from the inside out, but is thwarted at every turn, and threatened by the “new order” scythes. Realizing she cannot do this alone—or even with the help of Scythe Curie and Faraday, she does the unthinkable, and risks being “deadish” so she can communicate with the Thunderhead—the only being on earth wise enough to solve the dire problems of a perfect world. But will it help solve those problems, or simply watch as perfection goes into decline?

Oh, I LOVED this book. I’m very late in writing up this review, but I still periodically think about it. What a cliff hanger! And book 3 won’t be out for another year!!
Though, someone was kind enough to share a link with an interview about this book and book 3 via goodreads: LINK!

Only major thing that bothered me about the ending of this book was how anticlimactic the outcome was of a certain subplot build up. It felt like a cop out, but it better get addressed in book 3!
Actually, listening to this book made me feel quite anxious, it gets pretty tense! I’m pretty excited for book 3, but it better only be a trilogy – much more of this and I’m going to me a complete mess!
I was also somewhat terrified at the records of Goddard’s speeches. His attitude was bad in Scythe, but in this he was banging on about “Making the Scythdom great again.”, sounding like another totally questionable person.

This book was told differently to the first. It had far more…grandeur? “If only he had listened, things would have turned out far better.”…it’s not exactly foreshadowing, but it’s certainly more. It took me far longer than it should to realise that that was because this is sort of told from the point of view of the Thunderhead which added a new element and was quite clever.

This book explores this world further than the first and we get to meet some new characters. The most notable being Greyson and Constantine. They’re both pretty important in different ways. Greyson is not connected to the Scythdom, his role is far more important and Constantine is the Scythdom investigator on the hunt for Rowan. I look forward to meeting them again in book 3.

Book 3 is going to be fairly interesting to say the least! Hopefully backups happened, but unlikely. One thing is for sure things are going to get messy!

While I had this book physically I listened to the audiobook. There was an offer via audible where I could buy one get one free and Scythe was one of the only two that appealed to me – I figured I could listen to it to recap rather than read it and then go onto the book, but Greg Tremblay (narrator) did so well with the first book I just HAD to listen to the second, I certainly recommend it!