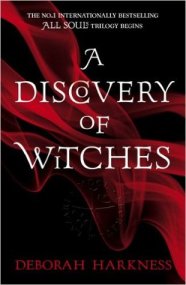 “Are we expecting visitors? The house thinks we are.”
“You’re joking! The house hasn’t added a room since the last family reunion.”

Deep in the stacks of Oxford’s Bodleian Library, young scholar Diana Bishop unwittingly calls up a bewitched alchemical manuscript in the course of her research. Descended from an old and distinguished line of witches, Diana wants nothing to do with sorcery; so after a furtive glance and a few notes, she banishes the book to the stacks. But her discovery sets a fantastical underworld stirring, and a horde of daemons, witches, and vampires soon descends upon the library. Diana has stumbled upon a coveted treasure lost for centuries-and she is the only creature who can break its spell.

I want that house! It hides things for you, gives you things you need and produces new rooms and items when they’re going to be required! Of course it can also get stroppy and slam doors at you but I think I could deal with that.

I’ve had this book since before the third one came out – I remember buying it in the supermarket, so that’s not too terrible…. I’m finally reading them! I’m not sure why it’s taken me so long, perhaps because while the fiction world is littered with vampires and shape shifter types, I’ve not been able to find decent books on witches and while I didn’t read these, they were the best books.
This wasn’t as bad as I feared but it also wasn’t as good as I’d hoped. There wasn’t much witchery going on.

The world building was clever though. Despite having been born into this world, situations lead to Diana ignoring it and the part of herself deeply embedded within it until she can’t ignore it any more. Throw her in the path of a vampire whose befriended daemons and you’ve got a full set of creatures to teach her (us) what’s up.

The best way to describe this book is comfortable. It’s a large book but I didn’t find it slow, nor did I find I needed to rush through it. Sometimes I reached a point where it was perfect for me to put it down and go and do something else – not because I was bored but because I could go off and think about it while I sorted things out. Then I quite happily came back later and read another chapter or two. I love comfortable books just as much as frantic books, certainly I get more sleep when I’m reading them! It all comes down to the right book at the right time.

Diana wasn’t whiny. I feel this is important because the teenage equivalents in this role are often written so. She had little interest in where she came from, but there’s a reason for that so I figure I can forgive her. Of course, she stumbles across something far bigger than the book – she doesn’t understand the rules of her own world so she’s going to shake things up a bit.
Matthew had a certain element of broody, but I think that all vampires over a certain age are required to, they have a lot of past to think over after all. I kept imagining Matthew Goode though, which was a little confusing as it wasn’t consistently.
I liked the aunts, but that might be partially because they had such a fantastic house.

This was a great introduction into this world, even if I’m very unsure about how things are going to be going forward. I guess I better read the next book!