by Jennifer A Nielsen 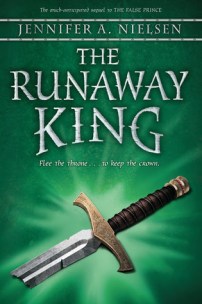 “Tell me why you knew I had another reason for leaving the castle last week. Do you recall that?”
“It was because you don’t run. Not even when it’s the only logical thing to do.”
“No. Never.”  – Page 214

He’s been King but a few weeks but it seems no one can see past his age. An assassination attempt and talks of a Steward force his hand. Those around him believe that the coming war can be prevented if they simply ignore it, but he knows different. Deserting the kingdom may be the only way to save it, so Sage heads to Avenia to join the pirates. He plans to either destroy them or bring them round to his side, but within their ranks are a few old acquaintances and no one ever leaves the pirates. Within their camp, not only does he find how deep the treachery lies, he finds new alies, but with this be enough to save Carthya?

Where as book one is straining at the limit of 5 stars, I feel this one only just made it in. Not because it was bad in any way, but because of how much I like the first. It feels almost criminal to class them as the same. Criminal! haha

Trying to be careful with this here, but I would recommend not reading this if you haven’t read the first book. Just in case.

So, I’ve read half of this book before. And Stupidly, even though it was right after the False Prince, I lost my faith in Sage. NEVER DO THIS!! Basically, by the end of the book, I was ready to pledge my sword to his cause. Then I remembered he was fictional and that I had no sword, let alone any idea how to use one, but whatever.
Let me just remind you, the boy is fourteen. I say this, not because this story is implausible, but because it is. He’s been serving his country since before he even realised it and the worst thing about him is how little he rates himself in comparison to those past. Also, he really could do with listening sometimes. But then, others could do with listening to him too, they just see his age. Age is just a number. You could be fifty and be as naive as a babe, or fourteen and as worldly as a grown person.

Ok, That’s all you’re getting from me. Quite desperate to read the next book. Leave me alone.