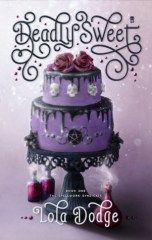 Thank you to Netgalley and the Publisher for the chance to read this book in exchange for an honest review.
Publish Date: 16th January 2018

For fans of Hex Hall, The Magicians, Practical Magic, and Food Wars!

Anise Wise loves three things: baking, potion making, and reading her spellbooks in blissful silence. She might not be the most powerful witch, but enchantment is a rare skill, and her ability to bake with magic is even rarer. Too bad one wants witchcraft on their campus. Anise’s dream of attending pastry school crumbles with rejection letter after rejection letter.

Desperate to escape her dead-end future, Anise contacts the long-lost relative she’s not supposed to know about. Great Aunt Agatha owns the only magic bakery in the US, and she suddenly needs a new apprentice. Anise is so excited she books it to New Mexico without thinking to ask what happened to the last girl.

The Spellwork Syndicate rules the local witches in Taos, but as “accidents” turn into full-out attacks on Anise’s life, their promises to keep her safe are less and less reassuring. Her cranky bodyguard is doing his best, but it’s hard to fight back when she has no idea who’s the enemy. Or why she became their target.

If Anise can’t find and stop whoever wants her dead, she’ll be more toasted than a crème brûlée.

Who knew baking cakes could be so life or death?

I received this book about 10 months ago in exchange for a review. So I’m just a little bit behind…!
I planned to read it for October, but I considered my recent reading times and TBR pile and came to the conclusion that starting early was perhaps a better idea. And then I happened to read the whole thing before October even started, so now I have to wait for a month for book two! Which I need to read right now because Wynn.

Anise lives in a world where witches are known and feared. After accidentally causing a little bit of bother because of a total CREEP she has to move to live with her great aunt who owns a bakery shop near a vortex – which is something magical that might have been explained….
She finally gets to learn about baking and magic together but there ARE a few problems…she requires a constant bodyguard – a mystery wrapped up in an enigma named Wynn – and someone really isn’t happy she’s there…

Anise was a nice character. We got some back story without being overloaded, she wasn’t whiny or too stupid – though at one point I really thought she was about to be a COMPLETE idiot – but she didn’t seem to be terribly fleshed out either. It might be because this was a short book that was only set over a week or two. We had some character growth, though not much, and I’m holding out that book 2 will give us some more meaty Anise-ness (as well as a whole bunch of Wynn).
Perhaps some of the reason Anise seems a little thin on the ground is because she’s in a place she doesn’t know much about – which is helpful for us as neither do we! But book two is definitely set up for all of us to LEARN stuff. Especially about Wynn…

It was nice her mums friends daughters became her friends, though I was suspicious of them at first. Not just vaguely there was a specific reason, but it might be a thing in book 2 or 3.
Or maybe it’s just that kind of society where women look out for women. We need more of that. So yes, I’ve decided that’s what this is. Thanks Lola!

I liked this witchy baking book – though it WAS more about baking than witchy. But that’s probably because it was about the family business of a novice bake witch….
I discovered that there will be a book 3, but  I can’t read the description because it has spoilers for book 2!! I’m finding it hard not to read it anyway, but what if what I hope for doesn’t happen?! I’ll spend the next month in a possibly false bubble of bliss thank you very much.
I look forward to learning more about this world and Wynn later.
Because he’s always a win!
haha! I’m not sorry, he really is.