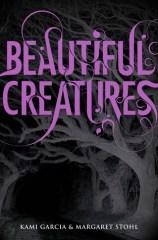 “The right thing and the easy thing are never the same.”

Lena Duchannes is unlike anyone the small Southern town of Gatlin has ever seen, and she’s struggling to conceal her power, and a curse that has haunted her family for generations. But even within the overgrown gardens, murky swamps and crumbling graveyards of the forgotten South, a secret cannot stay hidden forever.

Ethan Wate, who has been counting the months until he can escape from Gatlin, is haunted by dreams of a beautiful girl he has never met. When Lena moves into the town’s oldest and most infamous plantation, Ethan is inexplicably drawn to her and determined to uncover the connection between them.

In a town with no surprises, one secret could change everything.

First things first – the ending of the books is QUITE different to that of the film, so if you’re thinking you won’t need to read this book, think again! A whole different kinda thing is going on.
Listening to this book had me in a perpetual state of wanting to watch the film! It was quite bothersome. I wanted to SEE what I was hearing! This is nothing new though, when I read Vampire Academy after watching the film I spent a lot of time wanting to watch the film again, until I did and then I regretted it. I don’t think I’ll have that issue here though – despite the very different ending, I think the film adaption for this was done far better.
Though, hang about. I don’t remember the aunts in the film! Boy, I’ll miss those old ladies! They’re great!!

The narrator of this audio book was quite good and he did the voices well. Unfortunately there was sound affects that were really odd and off putting – plus the dreams and visions were impossible to hear! I will have to get my hands on an actual book so that I can find out what was going on.

It’s hard to write a full, first impressions review of this book because that’s long gone. I like this film and I’ve watched it several times so I knew going into this book that I liked the story. The world is rich and I’m invested in the characters. There are many added elements to the story that they obviously left out of the film. There were also characters in the book that were merged into one in the film. I liked the un-merged characters a lot better I have to say, but that’s only because it gave us far more insight into Ethans past.

There is one massive spanner in the works that I really want to know how they will resolve. I’m also majorly curious about what is going to happen next! It seems far less wrapped up than it was in the film and I’m really looking forward to continuing the story!
But first I really need to watch the film…