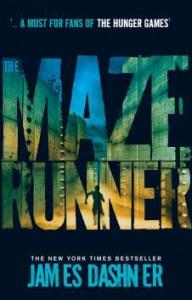 When the doors of the lift crank open, the only thing Thomas remembers is his first name. But he’s not alone. He’s surrounded by boys who welcome him to the Glade – a walled encampment at the centre of a bizarre and terrible stone maze. Like Thomas, the Gladers don’t know why or how they came to be there or what’s happened to the world outside.

Every day the boys attempt to master the maze and find the exit to the real world, but every day the maze changes and every night the maze is sealed. Terrible creatures roam the passages at night and devour anything and anyone they find. Only the fastest are allowed out into the maze. The others must work together to provide and care for the group. Thomas will do anything to be a Maze Runner. 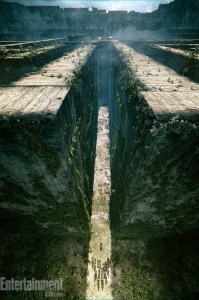 So they’ve turn this awesome book into a film! I cannot wait to see how they transfer this from page to screen. I loved this book so much.  I read it over 2 years ago now and it seems odd but I still remember so much of the story. This has to be a testament to how brilliant it was.  There were some things that originally put me off, such as the characters all being male and the fact that it all takes place in one small area but actually, these were the things that really made the story work. There was no annoying love interest and it was interesting to see how the boys split the roles in camp. Obviously testosterone caused quite a lot of fights but eventually reason took hold and the boys found ways to create order for the greater good. The consistency of the situation, allowed James Dashner to fill this book with all those little details that make you feel like you’re actually there experiencing it too, which at times was hell because I found myself on tender hooks most of the time!

In my original review I compared it to ‘Lost’ the TV series. And yes there are some similarities. For example there is no explanation as to why they are there or any hints as to what is expected of them. But unlike Lost there was a good pace and I didn’t find myself bored at any point, even with the monotony of the situation. Much of this book is full of the boys day to day lives but the tension keeps you interested.  I remember being very highly strung while reading this, especially when I’d have to put it down for a while. Every chapter ended in a way that made you have to read  JUST ONE MORE!

There are quite a few characters in this book (obviously as it’s a camp full of boys) but there are a few main characters. My favourites were Minho, Newt and Chuck. Their hope and continuous determination made me really root for their escape.

If you’re of a nervous disposition I wouldn’t recommend this book as it really frayed my nerves! But if you’re looking for a good Young Adult Dystopian/Science Fiction then I would say give this one a try (you won’t be disappointed.) 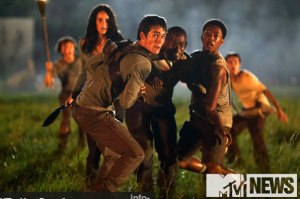 Maze Runner will be hitting the UK cinemas in October 2014