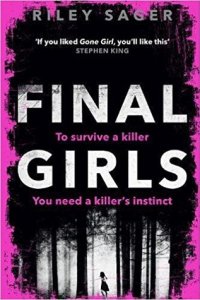 “That’s not your choice. It’s already been decided for you. You can’t change what’s happened. The only thing you can control is how you deal with it.”

Ten years ago, college student Quincy Carpenter went on vacation with five friends and came back alone, the only survivor of a horror movie–scale massacre. In an instant, she became a member of a club no one wants to belong to—a group of similar survivors known in the press as the Final Girls. Lisa, who lost nine sorority sisters to a college dropout’s knife; Sam, who went up against the Sack Man during her shift at the Nightlight Inn; and now Quincy, who ran bleeding through the woods to escape Pine Cottage and the man she refers to only as Him. The three girls are all attempting to put their nightmares behind them, and, with that, one another. Despite the media’s attempts, they never meet.

Now, Quincy is doing well—maybe even great, thanks to her Xanax prescription. She has a caring almost-fiancé, Jeff; a popular baking blog; a beautiful apartment; and a therapeutic presence in Coop, the police officer who saved her life all those years ago. Her memory won’t even allow her to recall the events of that night; the past is in the past.

That is, until Lisa, the first Final Girl, is found dead in her bathtub, wrists slit, and Sam, the second, appears on Quincy’s doorstep. Blowing through Quincy’s life like a whirlwind, Sam seems intent on making Quincy relive the past, with increasingly dire consequences, all of which makes Quincy question why Sam is really seeking her out. And when new details about Lisa’s death come to light, Quincy’s life becomes a race against time as she tries to unravel Sam’s truths from her lies, evade the police and hungry reporters, and, most crucially, remember what really happened at Pine Cottage, before what was started ten years ago is finished.

This wasn’t my favourite, but I’m pretty sure it has nothing to do with the writing and more to do with the storyline itself. It was well written – seemingly aiming to make you suspect everyone – and the best part was finding out it was written by a man. THIS is how you man-write women. Seriously Stephen King, take note!! Bizarrely enough, they were real people!
Though the sex scenes didn’t seem to take the women’s pleasure into account however. But while it can be assumed that’s a male thing, I’m pretty sure I’ve read other books that have done a similar thing – for speed.

I was tempted to DNF this book because it was so dramatic and I found myself quite tense while reading it, but I decided to flip through to the end to get the general idea and ended up confused enough to go back and give it all better read, rather than just leaving it and staying confused. I’m pretty pleased I did, as I wasn’t expecting that ending – I’m not sure I liked it though!

I felt that Quincy, our Main Character, was very easily lead. But I’m not sure quite what to think about it. I found it annoying when I was reading the book but when I think about it now, I can’t really blame her. She lost all her friends [but she can't remember how] and is expected to be ‘normal’ by her mother and her boyfriend so any bit of difference was probably a happy escape.
I really wasn’t impressed with her boyfriend either to be honest. But I don’t think I was meant to be – he added to her bland and boring life, being all blah and actually with his job he was a very odd choice. Some might say it was a subconscious decision on her part…

As to Sam – her backstory was quite interesting – not what I expected at all! But I think in the end it helped Quincy, the unexpected. I mean, the outcome was less than ideal, but I THINK it helped.
The ending was a little shifty, it’s true

This was not quite the book I was expecting when I chose and read it.
But it was interesting anyway and while I find it unlikely I’ll read it again I’m glad I didn’t DNF it.