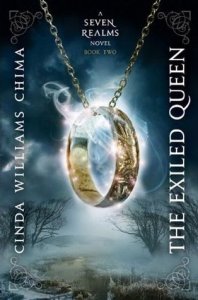 “And it’s not just a matter of you hurting me.
I will hurt you too, even if I don’t want to, I’m not the girl you think I am.
And you will remember this conversation , and wish that you’d listened to me.”

Haunted by the loss of his mother and sister, Han Alister journeys south to begin his schooling at Mystwerk House in Oden’s Ford. But leaving the Fells doesn’t mean that danger isn’t far behind. Han is hunted every step of the way by the Bayars, a powerful wizarding family set on reclaiming the amulet Han stole from them. And Mystwerk House has dangers of its own. There, Han meets Crow, a mysterious wizard who agrees to tutor Han in the darker parts of sorcery—but the bargain they make is one Han may regret.

Meanwhile, Princess Raisa ana’Marianna runs from a forced marriage in the Fells, accompanied by her friend Amon and his triple of cadets. Now, the safest place for Raisa is Wein House, the military academy at Oden’s Ford. If Raisa can pass as a regular student, Wein House will offer both sanctuary and the education Raisa needs to succeed as the next Gray Wolf queen.

Everything changes when Han and Raisa’s paths cross, in this epic tale of uncertain friendships, cut-throat politics, and the irresistible power of attraction.

I read this some time ago and I just kept putting off writing up a review. I wrote one in a notebook almost right away too, which is lucky as I don’t remember details about this book now…
I think I just kept putting it off because it was a series continuation and there wasn’t really much to say without giving things away. If I remember rightly it’s set almost exactly after the first one so it really is a literal continuation.
But here is what I had to say for myself all that time ago:

Ok, so the “Could be a little weird” thing happened – not so weird. I’m actually quite supportive of it now! Who’d have thought?

Things are getting messier in this book. Which makes sense with two more books to come after this one. I’m so tempted to peek at the end of book 4! Ugh, horrid habit. I will force myself to wait until I get there properly. I can do it!

Both Han and Raisa have changed in their 10 months at school. Bot that I’ve noticed much – they were still at school! Han i the most noticeable because he was changing his outside too, on purpose.
But what I really want to know is what’s fully different about him now and who he reminds Amon of! He’s also being clever but it’s dangerous and so helpful.

I felt quite bad for Amon to be honest. I originally hoped they’d find away around his little issue, but now I’m not so sure I want them too.
I’m also wondering about Han’s amulet, Dancers use makes sense with what I had in mind!

You can really see tiny pieces moving into place, it’s great! I have hopes and wishes for where this is going, but they seem like they’re two obvious.
I mean, I WANT them to happen, but it’s likely they wont.

See? Barely a review! And yet I couldn’t work out how to say more without spoiling book 1.
I hope to return to this world soon before I forget it all completely, but I’m afraid I’m a mood reader and I haven’t re-found the mood!