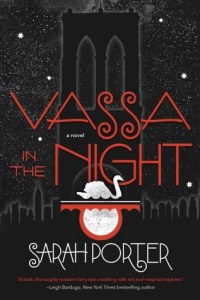 “Oh – and the nights should go back to normal now. I’m pretty sure that’s fixed.”
“I see. And I suppose you also had not-nothing to do with fixing the nights?”
-Page 292

In the enchanted kingdom of Brooklyn, the fashionable people put on cute shoes, go to parties in warehouses, drink on rooftops at sunset, and tell themselves they’ve arrived. A whole lot of Brooklyn is like that now—but not Vassa’s working-class neighbourhood.

In Vassa’s neighbourhood, where she lives with her stepmother and bickering stepsisters, one might stumble onto magic, but stumbling away again could become an issue. Babs Yagg, the owner of the local convenience store, has a policy of beheading shoplifters—and sometimes innocent shoppers as well. So when Vassa’s stepsister sends her out for light bulbs in the middle of night, she knows it could easily become a suicide mission.

But Vassa has a bit of luck hidden in her pocket, a gift from her dead mother. Erg is a tough-talking wooden doll with sticky fingers, a bottomless stomach, and a ferocious cunning. With Erg’s help, Vassa just might be able to break the witch’s curse and free her Brooklyn neighbourhood. But Babs won’t be playing fair…

I keep calling this Vassa AND the Night! Though, that’s also accurate I guess. But it makes me feel really silly….

I’ve had this book a while now – it came in a book box, maybe a few years ago. For some reason I was saving it because I thought it has Christmasy themes or some kind of Christmas connection. I kept missing time to read it at Christmas though so when I decided I needed a short book to read between A Court of Mist and Fury and A Court of Wings and Ruin to get me to the weekend I decided to choose it!

I caught a fever however, which really didn’t add to my enjoyment of the book, I have to be honest. The periodic ‘other’ chapter really threw me off, far more than usual. I wasn’t able to travel through the story while rolling with the fever, I had to also roll with the book. Quite uncomfortable.

In the end it was an interesting story but I was left with two main questions. What about the swans? And what about her foot?!
Also, there was no Christmas. I wonder where I got that idea from?

I know something really messed up was happening in this story, but I was really enamoured with the idea of each night taking roughly 4 days worth of time to go by. A weekend would have been a fortnight! That would be amazing for reading and chores and catching up on sleep. Man would night shift suck though.

Vassa was an interesting character, as was Tomin and the motorcyclist.
I also felt a little sorry for Vassa’s new friend who she couldn’t save – but only a tiny bit.
And I liked that her sister came back.

I could definitely have stood a longer ending – they didn’t get very far…Also, there was some wrap up I would  have liked to see too.
I’m also interested in reading the original myth or legend that this is based off of too.