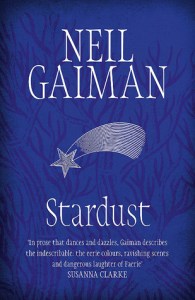 Stardust is an utterly charming fairy tale in the tradition of The Princess Bride and The Neverending Story. Neil Gaiman, creator of the darkly elegant Sandman comics and author of The Day I Swapped My Dad for Two Goldfish, tells the story of young Tristran Thorn and his adventures in the land of Faerie. One fateful night, Tristran promises his beloved that he will retrieve a fallen star for her from beyond the Wall that stands between their rural English town (called, appropriately, Wall) and the Faerie realm. No one ever ventures beyond the Wall except to attend an enchanted flea market that is held every nine years (and during which, unbeknownst to him, Tristran was conceived). But Tristran bravely sets out to fetch the fallen star and thus win the hand of his love.

I saw the film of this first and absolutely LOVED it which meant I then needed to read the book.
They were different enough that I wasn’t impressed with the book – the ending of the film is far more romantic and certainly made sense! Not to mention the film features some favourite actors and what has become one of my favourite songs!!

However, I thought I’d give it another go and this time decided to listen to it as things can seem very different when you listen to them. I spent a lot of the book thinking about the corresponding scenes in the film so once I’d finished listening to it, I watched it. Much to my surprise, I spent the film noticing the bits they got wrong or different!
And yes I truly mean wrong – in the film Yvaine talks of ‘break my leg again” but she hadn’t broken it before…?

Perhaps this should have been a book vs film post, but I’m not sure which would win at this point!
So, of course I recommend reading the book first.
The major difference is that in the book his name is Tristran not Tristan, which I hadn’t actually noticed…I just knew the narrator wasn’t getting it wrong because he was also the writer!!

I thought it was hilarious in the book though that there was 6 months between him and his sister and no one talked about it and he didn’t seem to notice or know that it takes 9 to form a baby! Or at least he never put the two together…

It’s quite a short book too, I’d have liked more about his adventures in Faerie and about his journey with Yvaine. Especially as it’s a short time for her to stop hating him so, even if he did save her life a bunch of times.
She also had a purpose in the book. She knew more about the item she had. But also it was weird, because she wore it around her waist – but under her dress? I couldn’t work that out.