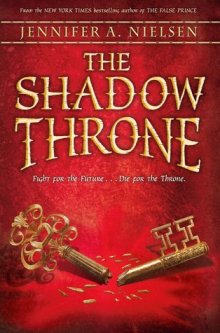 ‘I follow my orders without question, as a good soldier would. You ask the same from your soldiers.’
‘No, I ask them to be good people. That way if they follow my orders, I will know I am doing the right thing.’ – page 148

Despite his best efforts, war has come to Carthya far more swiftly and on a far larger scale than Jaron had anticipated. With King Vargan of Avenia personally ensuring Jaron takes as many hits as he can deliver, things are not looking good. He’s had little time to prepare but is that enough time for his quick wit to think of a way out for his people?
With his friends flung far and his forces spread thinly, Jaron my scrabble for every advantage he can claw back from his enemies. Things take a turn for the worse when he finds himself surrounded and alone within an enemy camp and even Kings break sometimes…

I just…I don’t…oh, where to begin! I don’t get why it’s called the shadow throne, I must have missed something. The other two’s names made sense, this one, not so much.
Boy do I hope for a novella of some sort, maybe ten years later. No more  books, cause that might mean something bad again, unless it doesn’t, in which case that’s good, they’ve had enough.
I was pretty sure this book wouldn’t get more than 4.5 voodoos, I was convinced. Mainly because I felt that The Runaway King only just got a 5, but at the end this deserved no less.

I am just in awe of this character, ok it’s only a story, but to go through what he has gone through for the reasons he has and yet he thinks so little of himself is just phenomenal, I’m glad his people know at least some of what he’s done for them and so happy his family and friends know it all.
I wish we had found out the reason for King Vargan’s vendetta. He seemed single-mindedly driven to cause as much agony as possible. Unless he saw Jaron’s warning against war as a challenge from an upstart boy and took it as a personal insult? And a longer conversation with Connor at the end would have been nice. Why?!?!

I’d have made them all sign a treaty before leaving the castle, just sayin.

And I will admit it, this made me cry. Stupid book! Actually, it was heart breaking but in the end, I loved it. And I love that boy King.