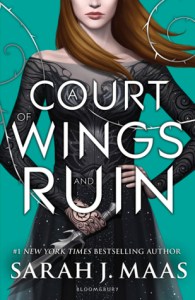 “What we think to be our greatest weakness can sometimes be our biggest strength.”

Looming war threatens all Feyre holds dear in the third volume of the #1 New York Times bestselling A Court of Thorns and Roses series.

Feyre has returned to the Spring Court, determined to gather information on Tamlin’s manoeuvrings and the invading king threatening to bring Prythian to its knees. But to do so she must play a deadly game of deceit – and one slip may spell doom not only for Feyre, but for her world as well.

As war bears down upon them all, Feyre must decide who to trust amongst the dazzling and lethal High Lords – and hunt for allies in unexpected places.

In this thrilling third book in the #1 New York Times bestselling series from Sarah J. Maas, the earth will be painted red as mighty armies grapple for power over the one thing that could destroy them all.

I have always loved that when using the initials of this book, you spell out WAR and this is the book in which they go to war. Very clever – and clearly on purpose.

It took me a long time to read this book and a lot I wanted to talk about at the beginning, I’ve forgotten about. For example, I’d forgotten where this book began, it wasn’t until I was checking the beginning for something that I realised that that was in THIS book, I was sure that was in book 2! That’s probably because I spent a long time not reading somewhere around the middle so it feels like I read 4 books rather than three.
There are a few reasons for this – I stayed up way too late and made my time to get ready for work in the mornings really tight when reading ACOMAF and I really didn’t want to be doing that again as this was a much bigger book. Also I knew tragedy was coming and I really didn’t want it to. It was quite a tense book and I was really surprised about how anxious it made me feel, even after I’d put it down.
And finally, I guess I just didn’t want it to end!

Carrying the tragedy theme on further, there were things, these things, that I knew were coming – my own fault – but that was fine, I assumed that I was ready for them because I knew they were coming and I was glad.
I really was not. Even braced for them they were pretty devastating! And I really can’t carry that any further without adding spoilers, so we’ll leave it there.

This book also destroyed any sympathy I had for Mor. I am so angry at her. I was surprised too that Fayre forgave her so easily too! My estimation of her went down as well.
FIVE HUNDRED YEARS??! No. That’s unforgivable. You could have found a way to say SOMETHING about it, without giving away everything.
I hope she’s not a main character in one of the next books, I’ll have to read it because of the others, but grrrrr.

I was quite surprised at the amount of – what seemed to me – loose ends left at the end of this book! I know there are further stories in this world and this is only the end of the Fayre/Rhysand Point of View, but they can’t all be future books, can they? Unless there are multiple loose ends per book. That seems more likely.

Which brings us to Fayre and Rhysand. Firstly, lets address that stupid final bargain! If they’d made something like that sooner, we wouldn’t’ be where we are right now, the bargain would have made two events impossible. They better hope they never need something like that event again, cause it’s not gonna happen! And I wish I could be more specific, but I cant because spoilers….
Other than that, they were adorable. As relationship goals go, it’s pretty impossible – because sharing a mindlink with your sweetheart isn’t something that happens, but the level of communication and the respect, as well as the teasing and ‘mockery’ was just perfect. I liked that they wrote letters and gave each other the space they needed too.
I want that for all of my favourites – they don’t need to have the mindlink.

I definitely see what was meant about the Tamlin/Fayre/Rhysand love triangle when everyone told me it would work out alright in the end. I agree.
I also think it will be interesting to go back to the beginning and see the developing relationship between Fayre and her sisters, because that’s not something I paid attention to the first time.