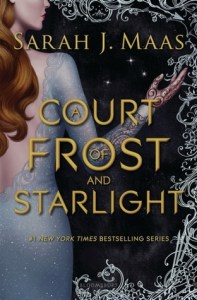 “It’s cold as hell! And who the hell let Cassian and Feyre decorate?”

Feyre, Rhys, and their close-knit circle of friends are still busy rebuilding the Night Court and the vastly-changed world beyond. But Winter Solstice is finally near, and with it, a hard-earned reprieve.

Yet even the festive atmosphere can’t keep the shadows of the past from looming. As Feyre navigates her first Winter Solstice as High Lady, she finds that those dearest to her have more wounds than she anticipated–scars that will have far-reaching impact on the future of their Court.

This seems to have just been a bridge book, like an extended prologue for ACOWAR, wrapping up Fayre and Rhys and setting up the others.
For some reason I thought it was a collection of novellas’ from different characters POV’s, not a single story – with different POV’s – and a sneak peak at the next book. Which I actually read, I never read them! II couldn’t help myself though, all I intended doing was checking to see who it was about, but as it just flowed right on, I didn’t stop.
As I said, bridge book!

I should have written this review BEFORE the sneak peak, because there’s no untangling them now.
I’m surprised at the attitude to Nesta though. I mean, when Fayre went through something similar there was a wholey different attitude, it was annoying. I mean,  Fayre seemed to want the help but we were in her head, we don’t know how she presented to everyone else and Nesta is a very wound-up-tight type of person, she’s not gonna just suddenly unwind because everyone wants her to. I know that she and Fayre are too similar for Fayre to be able to deal with – or so it seems – and that Nesta has never allowed Fayre to know her, but come on!

It was such a shame that so small a chapter was from her point of view as she’s clearly got something going on with her. We had none from Elain or Lucian or AZ or even Ameren at all though. Maybe that would have given too much away for future books? Hmmmm

I think this gave us a little more insight into Eris, for us certainly if not Mor. I think there’s a massive misunderstanding on her part here and I look forward to finding out more. I think that would be an interesting story to follow and if we get a Lucien book, I’m sure we’ll have a good amount of time to explore Eris, along with Lucien’s past…

The visits to Tamlin were interesting too and I assume they were quite relevant. I do wonder where that’s going and if, just to surprise us all, he’ll have his own book. I do hope that one day he will understand what he did and fix his ways because that kind of character development would be pretty fun to read about.
Are there only 3 more books? Because we need at least 4 to cover all the people I want more on….
But I guess two could share a book, I mean, it would make sense…..