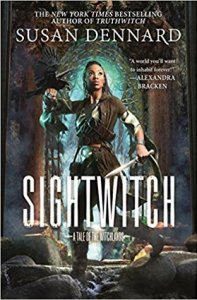 “History might easily be rewritten, but someone somewhere always remembers what truly happened.”

POSSIBLE SPOILERS FOR THE SERIES AHEAD!

From New York Times bestselling author Susan Dennard, Sightwitch is an illustrated novella set in the Witchlands and told through Ryber’s journal entries and sketches.

Before Safi and Iseult battled a Bloodwitch…

Before Merik returned from the dead…

Ryber Fortiza was a Sightwitch Sister at a secluded convent, waiting to be called by her goddess into the depths of the mountain. There she would receive the gift of foretelling. But when that call never comes, Ryber finds herself the only Sister without the Sight.

Years pass and Ryber’s misfit pain becomes a dull ache, until one day, Sisters who already possess the Sight are summoned into the mountain, never to return. Soon enough, Ryber is the only Sister left. Now, it is up to her to save her Sisters, though she does not have the Sight—and though she does not know what might await her inside the mountain.

On her journey underground, she encounters a young captain named Kullen Ikray, who has no memory of who he is or how he got there. Together, the two journey ever deeper in search of answers, their road filled with horrors, and what they find at the end of that road will alter the fate of the Witchlands forever.

Set a year before Truthwitch, Sightwitch is a companion novella that also serves as a set up to Bloodwitch, as well as an expansion of the Witchlands world

Yeah, this is certainly a 2.5 book, even though it’s set before the other books.
Still, I read it first in my re-read and realised my error when I discovered I didn’t remember anyone’s names and had no idea what was going on….
Actually I didn’t know when it was going on either because the book blurb doesn’t tell you it’s a year before, like the goodreads blurb!
So, I read it twice. Once in the right place chronologically, then once in publication order – to make sure I hadn’t missed anything important.

To be fair, I didn’t exactly care about this book when it first came out because it wasn’t Bloodwitch and I wanted Bloodwitch right after I read Windwitch.

First read:
Um…I’m confused. I think I should know these people…but I didn’t realise that for ages.
I thought this was set way back in the past, that the letter was from a different Merik…Except I’m pretty sure this is the Ryber and Kullen from Meriks ship in Truthwitch?
To be fair it HAS been two years since I’ve read about this world BECAUSE THIS ISN’T BLOODWITCH!!!!

The two different lines of story were really interesting but I did find it hard to keep track because there wasn’t exactly a pattern that I noticed and when Ryber stopped using the year in her writings – which I was using to orient myself – I got really confused…again.
Kullen’s participation was interesting, how did he get there and what was going on with him?

I think I ended up with more questions than were answered – this feels like a bridge story rather than a little side adventure full of relevant information and I hope that answers are found in Bloodwitch.
I’m so excited for Bloodwitch, that I have it, that I’m so close to reading it!!

Second read:
Yes, I know these people.
Also wow.
How did Kullen get there and what is going on with him?!

I’ve realised something I missed last time too – two people were missing at the end – where did they go?! And who are they to the rest of their story?
I mean, the obvious choice can’t be right but their last words aren’t really helping that case which is rediculous and there is so much evidence about NO but I really want it to be YES that I’m mostly ignoring all that because that would be so interesting.
But oh boy, my biggest question about the whole thing this time around is; BIG BROTHER?!

And I do wonder why Kullen needed to know this – the book is what he saw when he read the Sightwitch diary Ryber gave him – they have a way of changing – I assume to show what needs to be shown?

I hope we get more answers to ALL of this in Bloodwitch!
Far better the second time around – probably because I know who these people are now….