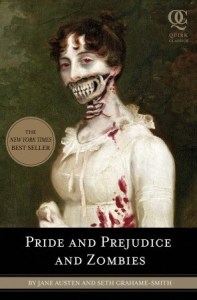 “My sisters and I cannot spend any substantial time searching for Wickham,
as we are each commanded by His Majesty to defend Hertfordshire from all enemies
until such time as we are dead, rendered lame, or married.”

“It is a truth universally acknowledged that a zombie in possession of brains must be in want of more brains.” So begins Pride and Prejudice and Zombies, a bold re-imagining of Jane Austen’s classic novel. As our story opens, a mysterious plague has fallen upon the quiet English village of Meryton—and the dead are returning to life. Feisty heroine Elizabeth Bennett is determined to wipe out the zombie menace, but she’s soon distracted by the haughty and arrogant Mr. Darcy. What ensues is a delightful comedy of manners with plenty of civilised sparring between the two young lovers—and even more violent sparring on the blood soaked battlefield. Complete with romance, heartbreak, sword fights, cannibalism, and thousands of rotting corpses, Pride and Prejudice and Zombies is an audacious retelling of English literature’s most enduring novel.

This was a hard one to rate – I love Pride and Prejudice, so adding a Zombie element is just great.
Or it should have been, if we pay attention to HOW this was added though, the rating has to go down just a little.
This review turned out to be more of a comparison between the adaption and the original – for I have already reviewed that and I already knew the story.

I found this whole thing rather bizarre. Little bits had been changed here and there to fit into the new narrative but to me they felt a little jolty, almost as if it had been decided that too much story had gone by without an edit and something ‘… kinda around…. here!’ needed to be changed. Often it was just something in passing to make the world seem more brutal to fit in with the rest, but to me it didn’t feel like there was enough prep or explanation – just a throwaway thing never mentioned again, rather than something threaded into the story itself.
Other times it was some form of innuendo that really seemed out of place – they may have sat better if those in question had made them obliviously and they were solely for the reader, but they weren’t and were still out of character even for these altered individuals – there was not nearly enough of a scandalised reaction.

Mr Darcy’s attitude towards Miss Bingley was off too. At one point he was quite rude – in a manner that gave the impression he knew of her preference – but no one seemed to notice at all and the rest of the time he was just as oblivious as ever.
Charlotte was a great surprise though. It added a bit more interest to the story, but could have been threaded through a little more.
Also in doesn’t solve that particular problem…

I couldn’t quite work out when they were meant to have gone to The Orient either  – especially as I would have thought the Gardeners sensible enough to do likewise. Their oldest was 8 ad Lydia was 15, so they either had fewer than 7 years there, or they went at 8 and came back at 15 – is it enough time? And wouldn’t Lydia have continually been referencing The Orient if she was so freshly returned?

I think the film did a great job of smoothing the whole adaption out and adding an element of originality that was sorely needed. However I’m very glad we made it to Pemberly because that is where Darcy and Elizabeth truly meet.

Still really surprised that more people were not trained in ‘the deadly arts’ though. Through both the book and the film.