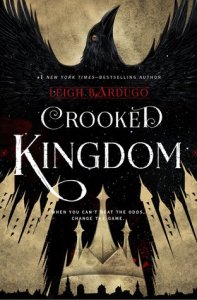 “This action will have no echo.”

Welcome to the world of the Grisha.

Kaz Brekker and his crew of deadly outcasts have just pulled off a heist so daring even they didn’t think they’d survive. But instead of divvying up a fat reward, they’re right back to fighting for their lives.

Double-crossed and badly weakened, the crew is low on resources, allies, and hope. As powerful forces from around the world descend on Ketterdam to root out the secrets of the dangerous drug known as jurda parem, old rivals and new enemies emerge to challenge Kaz’s cunning and test the team’s fragile loyalties.

A war will be waged on the city’s dark and twisting streets – a battle for revenge and redemption that will decide the fate of the Grisha world.

This feels unfinished! Maybe because of where we left everyone – I mean, couldn’t that last Kaz chapter have been a little longer?! Geez – but also, because of what felt like a good case of loose ends. I’m guessing that’s a set up for the next series? Though I hope it means we’ll see these guys again. I may have even seen something that said Leigh Bardugo promised as much, but I could be confusing that with someone else…

I DO know at least one will be in King of Scars because they’re mentioned in the blurb – but how much time has passed? I also hope that a lost 4 legged friend makes a new one! Would that be too out there? I don’t care, it would be adorable and they could comfort each other.

A major event in this book was actually spoiled for me because I was scrolling the reviews on Goodreads early on so I have little actual reaction to it. No spoiler warning either! THIS is why I stay away from reviews, because they’re so influential and have so much power – especially when people have no care. (I swear this is why I have so much trouble writing reviews – I’m worried I’ll accidentally let something drop)
I did find the event engendered the correct emotions in my however – even with my advance warning, so it must have been truly powerful!

This book was really quite twisty! I did wonder what was going to happen to these guys next after such an epic first book and as each event unfolded I just kept on getting more and more surprised. This was indeed a worthy sequel, even if I want to ignore some stuff.

I loved Jespers’ manifestation of ‘power sick’, I thought that was an interesting and valid way for it to go and I also thought it was so well done! But no one seemed to ever mention the glow he should have got on the other end which is sad. I would have thought Wylan would have noticed at least.

I love ow all these guys influenced each other and how they all rubbed off on each other just a little bit. For example, they all picked up a little of the way Kaz thought – but not enough to keep up with him, of course – which brings me back to the belief I have that we’ll see these guys again. I could almost feel the threads being set up for them. I look forward to these future adventures, but at the same time I dread them because that will mean that there’s more trouble for these guys and they could do with a rest, I’m sure.

I’m also pleased to report that a meeting of minds I was SO hoping for actually took place! I mean, we missed most of it because secret meeting and we were with another character (as I said before, clever writing style!) but it still happened!

I once read something that I thought insinuated that Inej didn’t respect Kazs’ personal boundaries and I was braced for that – but I saw no sign of that so I must have misunderstood. She pushed him it’s true, but he never told her to go away and he wanted to share with her. They had similar experiences and I think that it helped both of them.
I still wanted that last Kaz chapter to be longer….

I’ll feel at a bit of a loss for a little while now, I loved these characters and the narrators and I want more of them!
I’m also all of a fluster over spoilers and I’m worried if I say anything else about much of anything that I might accidentally let something slip, so even though I’ve written a fair amount in this review, it’s all suitable foggy and vague!

I’me certainly glad I came back to this series, especially glad I chose the audiobooks too!