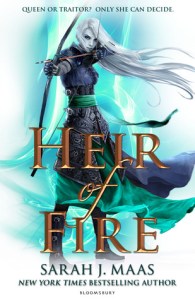 “Because I am lost,” she whispered onto the earth. “And I do not know the way.”

Consumed by guilt and rage, Celaena can’t bring herself to spill blood for the King of Adarlan. She must fight back…

The Immortal Queen will help her destroy the king – for a price. But as Celaena battles with her darkest memories and her heart breaks for a love that could never last, can she fulfil the bargain and head the almighty court of Terrasen? And who will stand with her?

Wow! Who would have though that Throne of Glass would lead here? Not just the storyline, but the writing too.
Throne of Glass gets on my nerves, probably because it ticks all the right cliche boxes. I say this all the time, but the only reason I ever stuck with it is because I read the novellas first – as recommended – and I too recommend this! They were written after Throne of Glass, as far as I remember, but were published as e-books before the book came out and they really are an important part of the story.
I kept collecting the series, assuming that after book one they would be more like the novellas, but I didn’t get around to them again until last year. I made it through book two before stopping then – I think perhaps book 2 was far more like book one than I’d hoped. However, this year I foud many of the books on a Buy One Get One Free sale on amazon, so I BOGOF’d my way through the series and decided to listen this time. The narrator is familiar, a sassy character from another book and I have to say she is a joy to listen to and I got through books one and two rather quickly and onto new ground, this book.

This book is exactly what I was hoping for, what I’ve been waiting for since I Read about Sam and Celaena.
I already know several large plot points from this series because when you’re THIS behind with a major series, there’s no avoiding them. Things like where Aelin has been for so long and who her love will be. Because of this, and I think because the anxiety was a little too high, I decided I would double check that I was correct and that I’d look up who else fell in love, with whom and who would survive – so I knew who to keep an eye out for and who to pay attention to. Despite spoiling the whole series for myself, it really raised the anticipation while it lowered the anxiety and I do like anticipation!

Heir of fire made me cry a whole bunch of times! Luckily never on my way to work! Celeana was so broken! I know Rowan was broken too, and that was also sad but we’ve lived through her breaking. Or, parts of her breaking at least, and seeing how it effected her was quite devastating. I like that something made Rowan pay attention and that they then decided to help each other – ’cause it sure worked out well for them!
I’m not too sure when the shift happened in Rowan, we spend so much time with Celeana, seeing him react with no reaction that it’s hard to determine. It must have been slow, then all at once. I do wish we’d got to see more of his side. It was probably all between words and we weren’t supposed to know it then so we don’t get to see it. Maybe one day we’ll get a novella about his side of it – I love having both sides of a story.

The last chapter was NOT my favourite. It echoed a prior book and that was just as sad then too. I mean, she had a point, but still noooo!
I hope I don’t have to wait too long!

It was painful seeing Chaol and Dorian so at odds in this book. I mean, we’ve seen them sort of at odds quite a bit to be fair, but we’re promised that they actually really like each other and that they’re really good friends. Their whole part in this was nerve wracking. Chaol went through quite a change, though he fought it  tooth and nail and Dorian seemed to have sort of been given something to occupy him while the adults got on with it.
Aedion was clearly my favourite part of this whole bit. He added an extra layer to this part of the story that was just great.
All three are completely useless though, so I’m really glad that Celeana has Rowan in her corner now at least.

Dorian though – How do you come back from THAT?!

I really wasn’t invested in Manon all that much to be honest, even though I knew she was going to be important. I made myself pat attention though and I’m glad I was listening rather than reading – harder to skim. I’m interested to find out how her storyline will intersect with the others though! Especially how she’ll get to her End Game.
I got more into her story as it went on however. I loved the whole part about her discovering exactly how smart Wyverns were and all the other little things she’s been finding out.

I love books where there’s a big bad or a tyrant and they accidentally build their own destruction. I’m very much looking forward to reading [or, listening to] this series further and I’m excited to see all these pieces pull together!