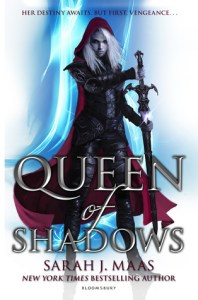 Everyone Celaena Sardothien loves has been taken from her. But she’s at last returned to the empire—for vengeance, to rescue her once-glorious kingdom, and to confront the shadows of her past ..
She will fight for her cousin, a warrior prepared to die just to see her again. She will fight for her friend, a young man trapped in an unspeakable prison. And she will fight for her people, enslaved to a brutal king and awaiting their lost queen’s triumphant return.
Celaena’s epic journey has captured the hearts and imaginations of millions across the globe. This fourth volume will hold readers rapt as Celaena’s story builds to a passionate, agonising crescendo that might just shatter her world.

This wasn’t as much of an exciting discovery as Heir of Fire – probably because I automatically assumed it was going to continue in the same vein and that I would therefore like it just as much.
Also, I kept flicking forwards with the actual book even while listening, just to check things out y’know?
I didn’t tag as many things while listening to this book though, possibly because I was more intent on where it was going than where we currently were. Though this series would be a perfect one to apply the tagging system I want to try out to. So many plot points and character development moments and great quotes!

So now there is one major plot point that you likely know already, a series spoiler perhaps more than a book spoiler – if you haven’t read the series yet and are likely to, you probably already know this (because I did before now!) however if you are lucky enough to have avoided spoilers for this series so far, then please stop reading now! I am about to mention something that there isn’t really any way to be vague about, but I’ll try my hardest anyway. So it’s a spoiler, but I’m not spelling it out

What annoyed me the most in this book is how little Caol realises the difference between Celeana and Aelin. Everyone else seemed to see it right away, but not him. I wonder if it’s because he’d have to admit he missed something maybe. Or perhaps he just didn’t understand why there was such a difference?

At this point in any series with one main over arching plot I certainly find it quite hard to review the books without spoilers. I know I just mentioned one, but that’s my limit!

Ok, I lied. I’m going to mention Lysandra.
The things I didn’t like at the start of this series was that there was a love triangle and other females were set against our main character, predominantly Lysandra and Caltain. As the series went on however, these horrid cliches were systematically dismantled, and my most favourite take-down was the rivalry between Lysandra and Celeana which had been set up by their mentor. I love how their friendship is developing from the rivalry they had and I look forward to seeing how much further they go together.

So much has happened in this book! But I’m not even going to give myself time to process it and therefore give myself better material for this review, because I’m going to go right into Empire of Storms!
And, I’m assuming the next two books are actually happening at the same time.