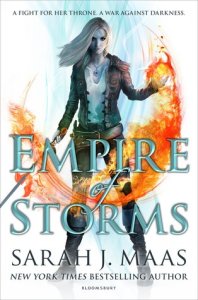 “Where do you think you’re going?”
“To call in old debts and promises.
To raise an army of assassins and thieves and exiles and commoners.
To finish what was started long, long ago.”
- page 72

The long path to the throne has only just begun for Aelin Galathynius as war looms on the horizon. Loyalties have been broken and bought, friends have been lost and gained, and those who possess magic find themselves at odds with those who don’t.

With her heart sworn to the warrior-prince by her side, and her fealty pledged to the people she is determined to save, Aelin will delve into the depths of her power to protect those she loves. But as monsters emerge from the horrors of the past, and dark forces become poised to claim her world, the only chance for salvation will lie in a desperate quest that may mark the end of everything Aelin holds dear.

In this breathtaking fifth installment of the New York Times bestselling Throne of Glass series, Aelin will have to choose what—and who—to sacrifice if she’s to keep the world of Erilea from breaking apart.

I was really disappointed with her reception!! But having thought about it, it does makes sense. When you know the worst of someone you’re not going to hand them your baby. But really, Darrow didn’t have to be so darned spiteful about it!

The next thing I wish to talk about is a spoiler for the series, it’s the same one I mentioned in my Queen of Shadows review, if you’ve managed to avoid series spoilers up until this point and want to continue to do so, don’t read this next paragraph! If – like me – you already knew a decent amount without having read it, you probably already know this, but you have been warned!!

I like seeing how different Celeana and Aelin are, I find it really interesting. I mean, I know they’re the same person of course, but Celeana is clearly an extreme personification of parts of Aelin. At first I didn’t really see the difference, but as she spends more and more time as Aelin it can be quite obvious. Celeana was a defensive move on the part of a young child so she herself is defensive, she’s designed to keep people away and from not looking too closely. By contrast Aelin is far more selfless and caring. They’re almost complete extremes. They do sometimes bleed together though, when Aelin is ruthless or when Celeana breaks.
They may blend together into one terrifyingly clever being and I’m looking forward to see what she’s going to do!

I loved Manons truth and while it chipped at her, she rolled with it and adapted, like it was nothing more than a buffeting wind.
PLUS she and Dorian are adorable with their Witchling/Princeling banter. I wish to keep them. I look forward to the rest of her and their arc.

Elide was a surprise. (I didn’t expect for her to become a favourite, but I like all the main circle at the moment.) She is a lot like Lysandra, except she doesn’t change her outside. There is such scope for her abilities, I look forward to finding out what she does too.
Lorcan is on an interesting arc too and I’m feeling a little sorry for him right now. I wonder what it is that changed his mind. I mean he really didn’t like Celeana. What it just the end of this book that changed his mind of Aelin? Or was it what Aelin and Rowan have and now that Elide is about, he’s feeling better? Either way, I want to find out, I would have liked more of him.

One of my FAVOURITE things about this series is that we sometimes get multiple views of the same situation. I love it when that happens, the slight variations fascinate me. I could stand far more of it though, as I said, with Lorcan as an example.

Aedion, I’m sad to say, has become my least favourite of the group. He seems to be a big snarly ball – he probably gets that from his father. He’s not what I expected when we first met him, he’s almost sulky now, like a teen whose vision of life has not been met.
I mean, he HAS had a bad time and his cousin hasn’t swooped in and fixed everything the way he probably dreamed growing up. They haven’t ‘twinned up’ and she keeps keeping stuff from him. it seems as though he wants to both protect her and have her storm in and fix everything at the same time. But if his bloodline genes breed true for him, maybe he IS just being a sulky teen…

That ending though! Harsh! Both Aelins mission and her choice!
It was exciting to see some old faces from the novellas turning up too!
But one thing is clear, no one will be winning a chess game against Aelin…

I did start to consider, close to the end of this book, switching to Tower of Dawn before getting to this cliffhanger ending, but I knew it was coming and though I did start that, in the end I came back to this one – mainly to prevent confusing review writing times! I don’t think hopping the seas with Caol will be too much of a problem before the end either.

2 comments on “Review: Empire of Storms”