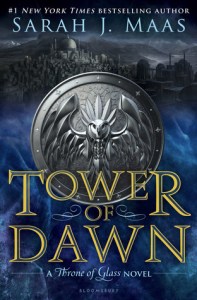 “He’d almost told the princess that she could keep Hellas’s Horse, but there was something to be said about the prospect of charging down Morath foot soldiers atop a horse named Butterfly.”

Chaol Westfall and Nesryn Faliq have arrived in the shining city of Antica to forge an alliance with the Khagan of the Southern Continent, whose vast armies are Erilea’s last hope. But they have also come to Antica for another purpose: to seek healing at the famed Torre Cesme for the wounds Chaol received in Rifthold.

After enduring unspeakable horrors as a child, Yrene Towers has no desire to help the young lord from Adarlan, let alone heal him. Yet she has sworn an oath to assist those in need—and will honor it. But Lord Westfall carries shadows from his own past, and Yrene soon comes to realize they could engulf them both.

In this sweeping parallel novel to the New York Times bestselling Empire of Storms, Chaol, Nesryn, and Yrene will have to draw on every scrap of their resilience if they wish to save their friends. But while they become entangled in the political webs of the khaganate, deep in the shadows of mighty mountains where warriors soar on legendary ruks, long-awaited answers slumber. Answers that might offer their world a chance at survival—or doom them all . . .

Noooo, don’t end it there!! I want to know her reaction to his tale!! Is it in the next one?! Really ! How rude.
I’m also really nervous about Faux reunions now.

I had trouble with this book. I was listening to it, like the others and I was having trouble with the names. I think it was that while it was part of the wider story, there was a newbooks worth of characters to pay attention to and we were given them all at once, it just felt a little weird. It wasn’t because they are weird and exotic names, because no one can pronounce any of the names in this series (unless you listen to them) it was just that I was settled into the world and I was suddenly yanked out and thrown across the world.

This started out as an intended novella, so with that in mind the size was pretty surprising. What’s more surprising is the LACK of things in this book. A lot of the space was taken up with getting us into the story, but then we got to the end and there were things we didn’t get to see, like the previously mentioned reaction, as well as the second half of Nesryns tale. At the side of this book an extra chapter or two really wouldn’t have hurt. It was also great that, even across the sea, Aelin has friends and is making waves.

I liked seeing old faces and meeting new ones, though they just didn’t seem as interesting as the others. Maybe it’s because they were support characters but also at the same time they were pretty important. I don’t feel like we found out enough about them to care about them properly, except in context to their proximity to the characters we followed into this book. I’m referring to brand new ones, not those found in the novellas previously.
I Did like how several of them were all talking about the same person, but none of them realised it! It will make the meet up in the next book that much better. I hope we get to read it.

I’ve heard there is much dislike for Chaol, but out of him and Dorian originally, he was my favourite.
I was a little unsure of this book because of that hate – would I finally find out why the hate? But nope. We do get a good chunk of his back story though.
The other reason I wasn’t sure about this book is because it just wasn’t Kingdom of Ash!

Chaol blames himself for too much, but I’m glad Yrene has his back now. I’m also a little glad for his outcome too. The original general attitude seemed a little odd and not exactly ‘inclusive’ but this situation is the best of both worlds perhaps.

In the end, the size of this book wasn’t as big as I feared. Or at least it didn’t seem that way and while I was glad to set sail, it was just impatience and I could have stuck around a little longer and have been happy to have more story.

One thing that was quite odd though is that everyone in the series is in agreement that conquering the northern continent to make an empire is BAD. However, the conquered southern continent is completely amazing!!