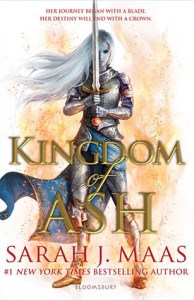 “Once upon a time, in a land long since burned to ash, there lived a young princess who loved her kingdom …”

Aelin Galathynius has vowed to save her people―but at a tremendous cost. Locked within an iron coffin by the Queen of the Fae, Aelin must draw upon her fiery will as she endures months of torture. The knowledge that yielding to Maeve will doom those she loves keeps her from breaking, but her resolve is unraveling with each passing day…

With Aelin captured, friends and allies are scattered to different fates. Some bonds will grow even deeper, while others will be severed forever. As destinies weave together at last, all must fight if Erilea is to have any hope of salvation.

Years in the making, Sarah J. Maas’s New York Times bestselling Throne of Glass series draws to an explosive conclusion as Aelin fights to save herself―and the promise of a better world.

Wow.
She pulled out all the stops and it still wasn’t enough! But then she brought out the wine she’d only just made and suddenly everyone was drunk!
Not sure what that’s about, just thought I’d go with it and add a metaphor. Moving on…

Please note, this review will contain spoilers. Spoilers for the series, also possibly tiny spoilers for this book. I tried and I started out trying to be  vague, but I definitely mention things that aren’t there, so that’s spoilery!

For some of this build up was very “Do we need this?” But then I knew where we were going so that probably ruined most of the tension and I was really impatient to get there and find out ALL the details because wow.
I also had expectations I had picked up from having read things by other people, but again, no idea what these comments actually reference because I couldn’t find the parts it talked about – perhaps they were out of context conversation pieces and not about the actual book events? Who knows, but that’s happened several times recently and so I’m going to ignore all future comments like that.

Aedion just annoyed me. I know he was hurt and felt betrayed but he still acted like that teenager I called him in my last review. Poor Lysandra had a hell of a time and I really don’t know how she forgave him. But then I guess she had some experience and they were in a war.
I was disappointed to discover that we don’t find out any more about his back story. I thought that there were lines in previous books that hinted there was more to tell and I therefore assumed we’d be given that before the end. He really did indicate there was more to him and he had a great start but he seemed to just become moody and petty. I’m so glad he finally got over it but it’s no excuse.
I think he got one of the worse deals in the whole book though, poor guy.

I was also expecting more subtafuge from Elide – I was a little annoyed at her too actually, cause really!
I know all these characters are angry. But their anger is actually at someone else…

I loved all the re-meets and I really think the whole book should have just been about people meting again and telling each other their stories. I’d have been very happy with that!
I would have also loved to see more of Darrows reactions because seriously. I also kind of wanted Aelin to rock up to him and say “Sorry I’m late, I was being tortured by Maeve. What did I miss?” because that would have been a little bit funny.

There are many other little bits I’d love to comment of but we really don’t have that much time. Also, actual spoilers.

But Rowan though! I wish we’d learnt what it was he’d written exactly, but he was so clever! He really is her match! I also loved that subtle crossover! Now that’s how to write multiple series…

Speaking of which, I’m hoping this series gets more too. I mean, Dorian and Chaol went off back to Rifthold – which is in ruins. Where is his court? Eho can he trust? Where will HIS country get the money to rebuild? How will his people react? I know I know, the series isn’t about him [and Manon] but an undate would have been nice.
Actually same goes for Manon. What’s her country like? What about her court? etc etc etc
What’s next?!
I definitely think this world is not dead. I really hope we get to go back. It’s really all in pieces and while we wont get another epic 7 book series set here with these guys, we could have a whole bunch of novellas and a mini tv series, or something…

Also where the heck is Vaughn?! I don’t actually remember him…did we ever meet him, except for that one time in passing?
And what the fluff happened to Nox? I was waiting for him!

All in all, I have to say this series got better with each instalment, or if you count the novellas, had a bit of a dip but totally picked itself back up and blew me away. When I’d only read Throne of Glass I didn’t understand the Maas magic – but I get it now!
I will definitely be interested in her next books. Any of her next books….