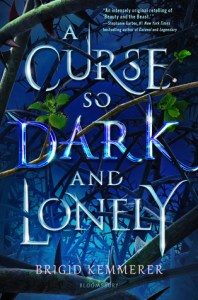 Thank you to Netgalley and the Publisher for the chance to read this book in exchange for an honest review.
Publish Date: 29th January 2019

Prince Rhen, the heir to Emberfall, is cursed. Forced to repeat the autumn of his eighteenth year over and over, he can only be freed by love. But at the end of each autumn he is transformed into a beast hell-bent on destruction, and after so many failed attempts, his kingdom and its people are barely holding on.

Harper’s life has never been easy, but she’s learned to be tough enough to survive. She won’t let anything hold her back, not her cerebral palsy or her mother’s deteriorating health. But when she is sucked into Rhen’s world, nothing is as it seems. Powerful forces are standing against Emberfalll … and it will take more than a broken curse to save it from utter ruin.

I was REALLY excited about this book – I love a good retelling, especially Beauty and the Beast – I was doubly excited when I was granted an ARC via Netgalley! Then the nerves hit, because I’ve read some bad retellings before But so many positive reviews turned up and my excitement returned. This emotional rollercoaster might have been why I went into this with such high expectations.
But also, It’s a Beauty and the Beast retelling so that had a lot to do with it.

For this review I read my uncorrected ARC copy as it was more convenient. But this means some things may have  been different, for example; I found one oddly placed passage that I checked and found it had been removed from the final. To be honest it was interesting finding – it was in the wrong POV chapter but the interesting part was that it had been there and had been found and corrected – I liked seeing that part of the writing process, but my point is there could have been differences.

This book has been well received for it’s representation as the main character has Cerebral Palsy.
Also for it’s mention of Stockholm Syndrome, which is thrown at the Beauty and the Beast story a lot, despite Belle not generally displaying any of the symptoms.

The writing of this book wasn’t overly complex which I liked. Not everyone reads to the same level after all and this book felt accessible without being condescending.
However, it DID feature the age old ‘not like other girls’ myth. It was never spelled out but it was very heavily insinuated. I wasn’t happy with the way the book seemed to all that all these ‘other girls’ had been totally fine with suddenly being kidnapped and taken to a castle in another world and they’d been perfectly happy to spend their time there. I mean, even after receiving the explanation, even the calmest most timid person is going to have been not fine with being there. Ok, after the explanation and a few weeks maybe they’d calm down – just like Harper – but hmmm, really?!

I loved that the curse came from something other than the original reason – but at the same time, the same reason was kept in? This confused me, but this is told in switching first person POV so that’s possibly why there seemed to be subtle contradictions that confused me. Actually, these weren’t the only little contradictions that frustrated me. They weren’t major, but they were there.
The curse ending was great too! Not on script and with room for more exploration.

So far so good, right?
Well, yes. The retelling part was great! The rest, no so much. The storyline had a feeling of being shoehorned into a too tight spot. It had such promise that it never lived up to.
My least favourite part was the forced love triangle vibes. With the love set up from the start – because BatB retelling – it was really annoying, especially as it didn’t have any heat! I can understand the setup as the actual thing had a purpose, but carrying it on? I didn’t feel it and I just got frustrated with it.
I’m not sure about the set up for book 2 either.
It just…something about the whole thing really wasn’t gelling with me. I need a bit of logic to smooth over the magic or I’m not getting it.

What’s 300 seasons? 150 years? Yeah, it was such a great promise and for me it missed.
This is probably why it’s taken me so long to write this review!