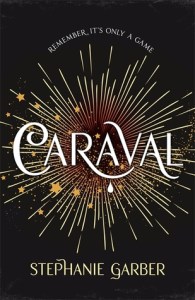 “No one is truly honest. Even if we don’t lie to others, we often lie to ourselves. And the word good means different things to different people.”

Scarlett Dragna has never left the tiny island where she and her sister, Tella, live with their powerful, and cruel, father. Now Scarlett’s father has arranged a marriage for her, and Scarlett thinks her dreams of seeing Caraval—the faraway, once-a-year performance where the audience participates in the show—are over.

But this year, Scarlett’s long-dreamt-of invitation finally arrives. With the help of a mysterious sailor, Tella whisks Scarlett away to the show. Only, as soon as they arrive, Tella is kidnapped by Caraval’s mastermind organizer, Legend. It turns out that this season’s Caraval revolves around Tella, and whoever finds her first is the winner.

Scarlett has been told that everything that happens during Caraval is only an elaborate performance. Nevertheless she becomes enmeshed in a game of love, heartbreak, and magic.

I started reading this the year it came out and I’m not sure why I stopped. Maybe I wasn’t in the mood for it, or perhaps I thought it was one to save until the whole series was out? Certainly, when I started listening to this book, the recap was a bit dull because it was familiar, but when I got to the point I stopped I distinctly remember wondering “Why did I stop this book?” So I’m pretty glad I returned to it.

Just like with Throne of Glass, I looked things up. This is another hyped and highly dramatic series and I realised that knocking down the anxiety wold help – unfortunately I’m left with more questions than answers as the Caraval info isn’t nearly as detailed as that of ToG! Still, what I did find certainly helped.

I’ve also waited a bit long to write this review AGAIN! I’ve already started book 2. I don’t even know why I procrastinate this any more. But moving on…

I liked how this was written – how it seemed the sisters were at the start, very clever. Their fathers motives though, I’m interested to see if we ever find those out.
And there was a plan here, I’d love to know more about it! As well as the thing I’m not meant to know about yet…

Scarlett felt a little bit like a wet blanket, but her fears were valid and not unreasonable considering the childhood she’d had. Tella felt quite callous in comparison, but as I’ve said already, I’m already into book two and we get some more explanations into Tella there. This book is Scarlett’s book though, so mainly we’re gonna think about her.
I definitely understand why Tella wouldn’t allow Scarlett to go through with the plan that she’d pinned all her hopes on and I also get why Scarlett was going along with the plan in the first place. I look forward to that being resolved fully, because there’s still a massive mystery there!

I liked Julian, he was a little suspicious, but he was trying to be helpful and it was a tiny bit adorable. He was really trying to win Scarlett over and draw her out. I don’t think he’s there yet, but I’m thinking his odds are good! I also love that he calls her Crimson. It started out as a fakeout, but it’s totally affection now.
Dante was just shifty. I did wonder if a little bit of a love triangle thing was going to be pushed here, but it wasn’t really so I’m very pleased with that. It’s fascinating that the way we know these characters might not actually be the way that they are. How does the acting in Caraval work anyway? Is it reinforced with the magic? Are you that person till the end?

Caraval sounded scary and Magical – I wish we’d got more time there. As it was, this was more about Scarlett searching for Tella than her participating. I think the audio book helped with the magic of it though, as it’s harder to jump over description to the next bit of dialogue if someone else is reading it to you!
That makes it sound like we don’t get much from it – Scarlett is in there, Caraval is happening, but her focus isn’t so much on the wonder, so we get some of it but there could have been far more!
The world building could have stood to have had more applied to it too. There are things that are easy to pick up, like the fact that it seems to be a bit of a fancied up historical sort of setting. Dresses are long, though fancy, and daring top halves are not such a scandal. Though, an unmarried woman being alone with a man is. But a woman alone or with her fiance doesn’t seem to be?

I liked this story and I like that there are mysteries that I don’t yet know. It would have been great if they’d been threaded into this one a little better, rather than just the epilogue, but I understand that Scarlett is pretty much not in on this yet.
I’m not sure if this is a series I’d re-read, but I’m holding out on that assessment properly until after the ‘Finale’ because I know there’s something coming!
Mainly cause I snooped.