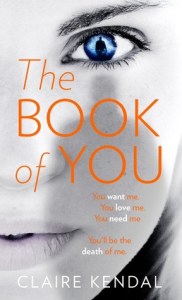 “As a young girl I was taught to be polite – say please and thank you – be respectful of other people’s feelings…and act like a lady.
The problem with that kind of upbringing is…unfortunately living by those rules alone can get in the way of trusting your instincts and keeping yourself safe.
Not everyone is deserving of respect.
Not everyone plays by the rules.
And sometimes acting like a lady can get you killed…”

A terrifying psychological thriller about obsession and power, perfect for fans of Gone Girl and Before I Go to Sleep.
Clarissa is becoming more and more frightened of her colleague, Rafe. He won’t leave her alone, and he refuses to take no for an answer. He is always there.
Being selected for jury service is a relief. The courtroom is a safe haven, a place where Rafe can’t be. But as a violent tale of kidnap and abuse unfolds, Clarissa begins to see parallels between her own situation and that of the young woman on the witness stand.
Realizing that she bears the burden of proof, Clarissa unravels the twisted, macabre fairytale that Rafe has spun around them – and discovers that the ending he envisions is more terrifying than she could have imagined.
But how do you protect yourself from an enemy no one else can see?

(Spoilers! Trigger warning: This book contains stalking and scenes of rape, drug use and violence)

As the description says, Trigger warnings for stalking, rape and drugging.

This book has been on my bookcases for years and for some reason I thought it was a YA book – yeah, no idea. Probably something to do with the cover.
It’s really really not a YA though.

This book is written in both first and third person, which makes more sense when I elaborate and say that a lot of it is the ‘event longs’ that Clarissa writes about her interactions with Rafe – which are the first-person parts, the rest is in third.

Clarissa was brought up to be polite and kind, but this has caused her some problems with regards to a colleague at work – this is a very real problem for many women so I thought this book did well in covering many tips and suggestions for when dealing with a stalker. This advice would also work on overly persistent people too.
Certainly for the UK which is where the book was set!
The information might be out of date now, but it’s still good to know something about – to start things rolling, you only need two pieces of evidence of the stalker. This didn’t cover digital stalking however.

Clarissa collected lots more than two pieces of evidence – I’m not sure she knew that at the time – and I was getting more and more anxious! Which was kind of the point as this was a thriller/chiller/horror.
I say horror because it was horrific.
Not the writing, that was excellent. I read this book in two days!

But Rafe was good at what he was doing. He smoothed everything over so well and if she’d been into him, she wouldn’t have even realised to start. She was too polite to say no when he insisted she go to his book reading and that was enough of a crack for him to start hammering a wedge into her life.
Boy it was scary. I don’t want to give too much away, but he was using all the charming tactics in the book to win people over and isolate her.

I expected the case to be more related to what she was going through, but really it was more about the attitude towards the case that was  what was getting to her I suppose.

The whole ending was a surprise! I’m not happy with ANYONE, at all! I mean, really? Humans are terrible.