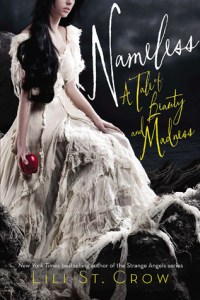 When Camille was six years old, she was discovered alone in the snow by Enrico Vultusino, godfather of the Seven—the powerful Families that rule magic-ridden New Haven. Papa Vultusino adopted the mute, scarred child, naming her after his dead wife and raising her in luxury on Haven Hill alongside his own son, Nico.

Now Cami is turning sixteen. She’s no longer mute, though she keeps her faded scars hidden under her school uniform, and though she opens up only to her two best friends, Ruby and Ellie, and to Nico, who has become more than a brother to her. But even though Cami is a pampered Vultusino heiress, she knows that she is not really Family. Unlike them, she is a mortal with a past that lies buried in trauma. And it’s not until she meets the mysterious Tor, who reveals scars of his own, that Cami begins to uncover the secrets of her birth… to find out where she comes from and why her past is threatening her now.

The start of this book was truly amazing – I read the first third of it in one sitting. Then we reached Cami’s birthday and some characters seemed to suddenly become other people. I mean, having more things to focus on will make someone a little different, but not THAT badly
True, Cami was distracted too but I’m not convinced her shift in focus was as well done as it could have  been, though perhaps it’s just because I don’t understand how she felt about not knowing who she was. She was a little flat though, she was brimming over with potential that never really developed. I’m not sure if it was on purpose and related to her amnesia or the fact she was adopted, but hmmm.
There wasn’t enough of an after either [there are two other books, though they focus on her friends so I don't think they'll count]. She was set up to be such an interesting person and yet her decisions were so stupid – almost those sterotypically found in the middle book of a trilogy where one character makes questionable choices to ‘protect’ another, but with less logic and I just found it so frustrating.

I really liked Nico but he was given a bad arc. His sudden distance didn’t make sense at all, especially when the time was taken to build up exactly how close these two were already. Yeah, ok. Things happened, but there were little things that the build up Nico would have done anyway and the only reason he didn’t that I can work out is Because Plot.

We were dropped into their love story, which I liked. I thought it would feel weird, as he’s the son of the man who took her in, but thought they mainly grew up together – he’s mostly been away at school – I got the feeling that he never thought of her as a sister. I also wonder if that feeling was encouraged? It felt more like friend love than anything creepy, for which I am glad.
I called it a love story rather than a romance because it also felt quite cutey, not quite pure cause Nico did make some comment about needing to back off – he’s older than her and she’s only 15 -16, but he fully respected that and pretty much seems to  be waiting for her to finish college which is adorable, and again confuses the  sudden change further!

I really wish that the middle and ending of the book matched the energy and feel of the start – that would have been one epic book.
Sure the ending was nice, but some of the magic of it had been lost in the middle and the conversations needed for us to fully understand were missing.

The world building was also a little off. The world itself wasn’t hard to get if you paid attention – we weren’t over explained to and a lot was left to us – perhaps too much though.
The deal with the mirrors was never explained, nor was Cami’s stutter. I mean, it didn’t even need to be complex. just a “Ah, yes. Everyone knows that *spoiler* is related to mirrors/can do mirror magic/ invented mirrors/ makes the best mirrors.” whatever.

It was quite light on the Snow White stuff too, which isn’t a bad thing. I liked how the apple cropped up – though I didn’t understand the explanation for ages because even though it said she cut the apple horizontally, I still didn’t register that it meant left to right not top to bottom! Ha!
I also loved that  her friend are Cinderella and Red Riding Hood. I hope their books continue building this world and buoy up this first book.