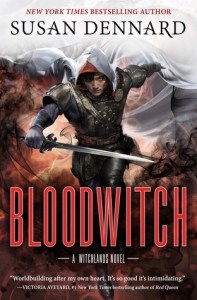 “From the day she had stabbed Aeduan in the heart, that heart had become hers—and she would not let this be his end.”

Thank you to Netgalley and the Publisher for the chance to read this book in exchange for an honest review.
Publish Date: 21st February 2019

Loyalties will be tested as never before

The Bloodwitch Aeduan and Iseult the Threadwitch race for safety, desperate to evade the Raider King. His attempts to subdue the Witchlands are gaining momentum, as his forces sow terror in the mountains, slaughtering innocents.

Despite differing goals, Aeduan and Iseult have grown to trust one another in the fight to survive. Yet trust is a tenuous bond . . . When Merik sacrifices himself to save his friends, he’s captured by the Fury. However, Merik isn’t one to give up easily, and he’ll do whatever it takes to protect those he loves. Then, in Marstok, Safi the Truthwitch is helping their empress uncover a rebellion. But those implicated are killed and Safi becomes desperate for freedom.

Perhaps if Safi and Iseult were united, their powers could bring peace. However, chaos is not easily tamed and war has come once more to the Witchlands. Fate’s knife will come for them all, and the Bloodwitch Aeduan can no longer hide from his past.

Bloodwitch is the third book in the Witchlands series.

PLEASE NOTE: There are likely spoilers for the past books – proceed at your own risk!

I really hyped this book up for myself because I’ve been desperate to know about Aeduan since Truthwitch. I was rather put out that we got SIGHTWITCH rather than Bloodwitch in 2018! I hold more than a little grudge against Sightwitch because of this (oops).
Then I was lucky enough to be granted an ARC and I was just too excited to cope. So, 5 months later, I’ve read it!

I was quite anxious for this whole book – this is only book three of FIVE! So much could still go wrong! I just want to leave all the characters happy. Also, for most of this book I was only truly invested in Aeduan, Iseult and Owl. Not that the rest of the book wasn’t interesting, but that’s all still subject to change, what with two more books.
I was particularly pleased we got to find out more about Aeduan in this book. We get his back story – and if you’ve been paying attention, we get his origin too! I’d wondered about it since the first time I read Sightwitch.  looking forward to the rest of that playing out, oh boy!
I liked that both Aeduan and Iseult had space to find themselves while they were together. At first because they didn’t care, then because they did. I look forward to them being a team in the future with all these new understandings.

I like Vivia a lot more now that I did previously. Having seen the people she grew up with in far more detail, well. I mean her father is a horrid, underhanded sort of man and I am not a fan at all. I look forward to him getting his ‘rewards’ because Vivia has a whole string of pretty powerful people from around the Witchlands on her side. Sure most of them haven’t met her, but they know someone who knows someone who knows and respects her so, it’s got potential. Especially now, what with the amazing growth Vivia has gone through and the realisations she’s come to – not needing a mans approval to save the world, thank goodness!
I’m looking forward to the next step in her story.

A lot has been happening with this storyline that has confused me. I’m not sure if it’s because I don’t understand it, or if I’m not supposed to understand it or if I’m purposely not trying to understand it because the resolution is yet to come. Are you confused yet?
It’s to to with the massive overall arc and I think that it’s probably that I don’t have enough pieces to form a pattern yet. I’m hoping that at the end I’ll be able to go back and finally get it. Maybe I’m just out of practice when it comes to reading a series?! Speaking of which, how do people write series like this?! It just blows my mind.

I’m going to miss the Aeduan focus this book had because he’s my favourite character – how could he not be? Mysterious and misunderstood with a tragic back story – it’s a total trap. Hopefully the next book is Iseults, though I feel we’ve learnt a lot about her back story already – perhaps she will uncover hidden secrets, or perhaps it will focus on the future of her rather than the past.
Also, Leopold can just step right back, thank you very much. (Though I am also looking forward to finding out more about him – I have some suspicions.)

I wasn’t sure how I felt about Merrik in this book. His situation got no better and he’s still in a big problem area. But I have new hope and I’l still holding out for a Safi reunion! He’s become more aware of the world too, I think that the world he thought he lived in was built by his father and hopefully he’s coming to the realisation that that’s not what the world is at all. He’s used his cleverness well here and I’m looking forward to future growth with him.

Safi didn’t seem to do much in this book, but that might just be my perception. Sure she’s made a powerful friend or two, but he best of her was her learning to use her power now that she doesn’t have to hide it. This book wasn’t really for her, but she’s still on the path to becoming someone amazing and I look forward to seeing who that is. Her last idea is a little bit out there though….
I’m still suspicious of Vaness – perhaps because we didn’t have the best introduction. Hopefully we’ll get to understand her more soon.

One thing I’m not a fan of is how it’s all been set up for the 3 main females to have more than one love option. It’s ALMOST like travelling around with 3 love triangles. Just stop it right there. I mean, it’s subtle but that’s where it needs to stay. Call it threads drawing closer or whatever, but no thank you. I have my ships and I will be sticking to them!
Don’t make me not stick to them….

I’m not totally sure where the end of this book has left us now. Everything has been shaken up and I will no doubt forget where everyone is at the end of this book before the next one. The major question is, can I take the pressure? Will I be reading book 4 when it [kind of] comes out? Or waiting for book 5?!
I’m make that decision next year…