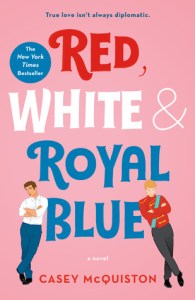 “Someone else’s choice doesn’t change who you are.”

First Son Alex Claremont-Diaz is the closest thing to a prince this side of the Atlantic. With his intrepid sister and the Veep’s genius granddaughter, they’re the White House Trio, a beautiful millennial marketing strategy for his mother, President Ellen Claremont. International socialite duties do have downsides—namely, when photos of a confrontation with his longtime nemesis Prince Henry at a royal wedding leak to the tabloids and threaten American/British relations.

The plan for damage control: staging a fake friendship between the First Son and the Prince. Alex is busy enough handling his mother’s bloodthirsty opponents and his own political ambitions without an uptight royal slowing him down. But beneath Henry’s Prince Charming veneer, there’s a soft-hearted eccentric with a dry sense of humor and more than one ghost haunting him.

As President Claremont kicks off her reelection bid, Alex finds himself hurtling into a secret relationship with Henry that could derail the campaign and upend two nations. And Henry throws everything into question for Alex, an impulsive, charming guy who thought he knew everything: What is worth the sacrifice? How do you do all the good you can do? And, most importantly, how will history remember you?

Ok, hold up. Bake beans on toast for BREAKFAST?! By themselves? But that’s dinner food. What is this? Is this UK normal?
Ah, it’s not normal to me, but them some of my ideas are more Scottish than English and sometimes I get quite confused. BUT BEANS ON TOAST FOR BREAKFAST?! With no egg or sausage?!

I’d seen this book about the place before I decided to buy it – the hate-to-love finally got me. I wasn’t sure I’d like it, cross cultural books can often be a bit iffy. And while there were a few things that were a little hmmm, overall it was well done.
Being on the British side of this was a little frustrating, thought I couldn’t exactly pinpoint why – I know the beginning was all part of the views held by Alex, which was character personality, but the obsession with the fourth in line to the throne requiring children was a little bit odd. We didn’t spend much time in the UK though so it wasn’t anything major.

We have a whole new, made up First Family as well as a whole new Royal Family – which seems a little more drastic but makes complete sense, considering the only unmarried princes we have are children….Not to mention, writing a romance about people that actually exist feels a little…sleazy.

This is written from Alex’s point of view, but not in first person so we have more information than just his thoughts. His Mexican heritage comes to him through his father, who is no longer married to his mother, but still crops up every now and then. He also has a sister and a best friend in the Vice’s granddaughter. I loved his mother, and actually found her use of powerpoints hilarious.
On the other side there is Henry and his sister (we’ll ignore his brother for now.) His father was apparently one of the Fox clan (a well known family of actors in the UK) and a BOND actor, who is dead, his mother isn’t really doing much of anything for some reason and his grandmother, the Queen has some rather…interesting ideas….
I’d have loved a Henry POV to be honest, but then that’s perhaps more to do with my love of seeing both sides as well as the fact I think I’d have understood him better.

I liked the relationship between Alex and Henry. The original conflict seemed bizarre, Alex’s reaction was rather extreme – the fact they were forced to be fake friends after the resulting hostility came to a head was just great. I also liked that there was more of a history there than that, it made everything seem more solid. Their relationship was set up well and I found it quite believable. The main issue that arose, also unfortunately seemed believable – especially looking at the current president… but in the end I also enjoyed how this whole thing was resolved.