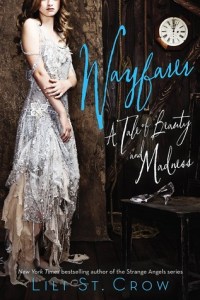 “The little tingles all over her were a product of his nearness. Why did he do that? Was it just  because he was a charmer from a pretty powerful clan, or was it something…personal…about him?”
-Page 163

The Charmer’s Ball. Midnight. And one glass slipper…

Newly orphaned, increasingly isolated from her friends, and terrified of her violent stepmother, Ellen Sinder still believes she’ll be okay. She has a plan for surviving and getting through high school, which includes keeping her head down and saving any credits she can earn or steal. But when a train arrives from over the Waste beyond New Haven, carrying a golden boy and a new stepsister, all of Ellie’s plans begin to unravel, one by one.

Just when all hope is lost, Ellie meets an odd old woman with a warm hearth and a heavenly garden. Auntie’s kindness is intoxicating, and Ellie finally has a home again. Yet when the clock strikes twelve on the night of the annual Charmer’s Ball, Ellie realizes that no charm is strong enough to make her past disappear…

In a city where Twisted minotaurs and shifty fey live alongside diplomats and charmers, a teenage girl can disappear through the cracks into safety–or into something much more dangerous. So what happens when the only safety you can find wants to consume you as well?

The problem with this series is that we’re fully inside the head of the protagonist. This isn’t a bad thing unless we’re in a story or series where we need more information than we can get this way, and this is one of those series.
What’s annoying is that a lot of the things in this book, Ellie doesn’t know about and it’s never explained to her and therefore us and that’s just frustrating.

Again we’re in the middle of a love story, which I really like – Avery was on his way to being in love with Ellie before he went away to school. He’s back and one of the first faces he sees is hers, so he decides to be more grown up about getting her attention, which is great because younger him was written in support of the INCORRECT and toxic idea that boys are mean to girls because they like them. NO! Never tell a girl this, never tell a boy to be mean to the girl he likes either.
He’s persistent in his attentions towards Ellie, which are actually a little creepy – but then there are no mobiles or messaging systems for him to contact her through, or for her to contact him though if and when she may want to and to be fair she was giving mixed signals all over the place. And, point in his favour, he even ASKED at one point! Still a little creepy.
What’s not covered is how she feels about him. Or at least, not in any detail. I got the impression that she didn’t like him when he was mean to her, but they had a connection when he came back – which isn’t explained, do they have some form of [soul]mate system? (There are moments to support this, in both the first book as well as this one, his making her feel better for example, however nothing is clear! )
The rest of the time she’s avoiding him for his own good…

The bones of this story were, again, brilliant. The flesh of it however was way more “Huh?!”
What is this magic system?! How does it work? What are the consequences of too much? Not using it? Stealing it? Lending it? etc etc
Also, how did the teachers miss what was going on? It’s part of their JOB! Where as talking to the step-mother is NOT. I mean, I know it’s slow, but something should have been happening. Also, how did they not pick up the new development, that part was ACTUALLY their job. Sheesh.

Ellie began to believe what her stepmother says – she was gaslighteed into pulling away. She#’s that character who pushes everyone away to ‘keep them safe’ which, to be fair has a little more logic here. She knows what her stepmother has done, she knows that people haven’t seen it, it’s reasonable to follow that up with “She’ll get away with this too.”
Her reaction to being pushed too far though, I mean I assume that was a magic thing, but we just don’t know!

There was unfortunately little to no Cami and Nico in this book, which leads me to believe that there will belittle to no Avery and Ellie is Kin which is such a shame. It would be a great pay off because they really need more exploration! I know that the romances are not the focus of these stories, which is actually great – however they’re there so they need the support otherwise they’re no better.

What was that epilogue though?! Was that our loose end from book 1? That’s a whole fairytale in itself. It’s also more rounded than the rest of the story…

I wish there was more to support this story, as it is it’s only another almost great one.