“Even in the Future the Story Begins with Once Upon a Time.” -Cinder

Well, I intended to review these separately as usual, but I read them far too quickly and therefore can’t go back and pretend. Hello Series Review!

I can honestly say, I don’t recall having read anything like this series before. (I must admit, I delayed reading this one, one reason was because ‘cyborg’ did put me off.  Sorry Cinder. Another reason was because I was also a little concerned at how well the series was received and that I might not like it. Silly I know.) The only thing that I can liken it to is when a writer creates a world and bases several trilogies etc within it.

This writing style was fresh and exciting. The whole series is about Cinder, but in each following book a new character or two are added and you get a glimpse into their lives and eventually, how they interact and join Cinder in her mission. Each main book is based upon a fairy tale:

This is a little introduction into the first days in the life of Cinder, living with her new step family and learning about being a cyborg.

I like this more now than I did when I read it, I was more interested in moving forward, not back but now that that frantic need to read the next book is gone, I can appreciate it more (I also read it in a rush as I was meant to be leaving the house.) I would say this could be read before Cinder, as an intro. But is also comfortably a later-read prequel.

Meyer’s version of the little mermaid – the original, which didn’t have a happy ending. An android with a faulty personality chip falls in love with a human and strives to one day tell him how she feels.

I don’t know how I feel about this one, I was again reading this in a rush, so perhaps I missed something towards the end. I’m not sure what happened. I’m also not sure how it fits in, though Cinder is a background character, amusingly playing the role of ‘sea witch’. Don’t get it? Go read it. It can be found here http://www.wattpad.com/story/11861703-the-little-android 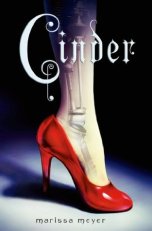 CINDERELLA
Cinder is a cyborg and a gifted mechanic in a world populated by Earthans and androids, looked down upon by the Lunars on the moon. Considered a second class citizen for being altered against her will, she is hated by her stepmother and one of her stepsisters and forced to earn the money for the family. One day the prince comes to her booth, seeking her renowned skills to fix his malfunctioning android and her simple, unhappy life is turned on its head by something as simple, or complicated, as attraction. But even as it’s getting better, it’s getting worse; her dear sister is struck down with an incurable plague that is terrorising earth. As she struggles to keep her head above water, she begins to discover all sorts of conspiracies lead her into the centre if an intergalactic battle. One or two of them might even be telling her a little bit more about her forgotten past…

I have no idea why it took me so long to read this book. Honestly, this book kept me up. As in, still reading at 4am when I have to be up at 8, kept me up. I then finished it when I woke up and rushed through my morning afterwards. The only reason I actually put it down in the first place was because I was driving long distance the next day. Never read and drive people!!

I may have mentioned this, but I love retellings of fairy tales…Especially unique ones. Cinder is only loosely based on Cinderella, for at the end of the book, she does not have her prince and her kingdom (to quote an old song I don’t quite remember), she has a far greater role waiting for her, if only she’s willing to reach out her hand and take it.

This is a little glimpse into the life of one of the characters of Scarlet in his youth. I would recommend reading this one after Scarlet. Though, actually the suspense might be fun if you read it before…. 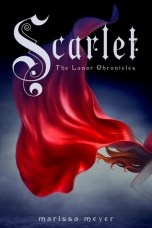 RED RIDING HOOD.
Little time has passed since Cinder visited the Ball, now in prison and awaiting deportation, her history is suddenly and unexpectedly dumped in her lap, leaving her only one option; break out.
On the other side of the world, Scarlet Benoit’s grandmother is missing and no one believes her when she says it isn’t by choice. There are many things Scarlet doesn’t know about her grandmother or the danger’s she’s been under her entire life. A Street fighter named Wolf seems to have some knowledge as to what has befallen her grandmother and as they attempt to unravel the confusing jumble left in her wake, their paths cross with that of Cinder and Captain Thorne, a fellow fugitive she broke out of prison with.  They all need to stay one step ahead of the Vicious Lunar Queen Levana who is doing everything within her power to get a foothold on earth, determined to make Prince Kai her husband and prisoner. But Cinder is just as determined that she doesn’t.

Not gonna lie, I dropped Cinder and picked up Scarlet and read the first line and thought “I don’t care about this person! What’s going on?” Clearly when I had firstly assumed each book was about a different story line I had been correct, right? Wrong! Mostly. The story did continue where Cinder left off, but first we had to catch up on the life of the books’ namesake. I felt a lot happier when I checked the book description and learnt that Cinder and Scarlet were going to team up, cause I hadn’t read that before…(I don’t like to know what happens in a sequel until I’ve read the first one).

Once I got over all that however, I was just as fixated at I was reading Cinder. I felt like I was less interested in Scarlet than I had been in Cinder but I still burnt through this book pretty quickly.
One thing though, if Scarlets hair was curly, there would have been no combing going on!! (I protest this every time I come across it as a person with a head full of curls) 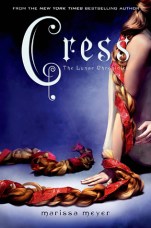 RAPUNZEL
Cinder, Thorne, Scarlet and Wolf have but one path to follow, over throw the vindictive Lunar Queen Levana. But they can’t leave Cress, a  lunar girl imprisoned on a satellite in the hands of their enemies, she’s too good a hacker and she just might find them where they hide.
Cress has lived in isolation for the past seven years with only her net screens and an occasional visit from her captor with new spying tasks, dreaming of the day when she will be allowed out of her isolation. Her latest task is one she’d rather not do and so she organises a rescue with Cinder.
But things go wrong and the group gets separated. Meanwhile, Queen Levana will let nothing get in the way of her marriage to Emperor Kai, not even three girls who suddenly find themselves between her and the total annihilation of the world.

I stayed up far too late reading this one too. I was really invested in Cress’ story. Or it may have been because I was desperate to know what was going to happen…
I loved Cress’ whole connection to this situation that Cinder has found herself in which I really can’t elaborate on because I don’t want to give anything away.
I did get a little frustrated while reading this book however. It seemed to me that things were going wrong just to drag the storyline  out and it seemed like it stood out far more within this book. I was so happy at the end though, everything seems to be wrapping up nicely. I’m both excited and sad that Winter seems to be the last book. Is it November 2015 yet?