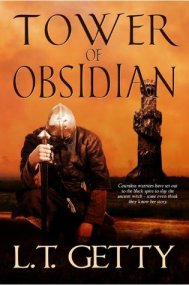 A copy of this book was provided by the author for review. (Thank you Leia!)

“We’ve both forgotten ourselves. Do not become what I became.” – page 336

Returned from war, Kale cannot wait to go about marrying his childhood sweetheart, but the prospects are bad; his father’s dear friend and the local Duke is dying and needs him to marry and protect his daughter as well as produce an heir before his scheming second wife takes rule in the name of their young son. Having more influence than he thought however, his wife manages to cast Kale from the city and inadvertently sets him on a path none have yet returned from; captured by a strange group of ghostlike men, he is sent to the Obsidian tower of legend to slay the witch. His best friend and arms-brother joins forces with his former betrothed to set about rescuing him, but Kales fate becomes bound to the tower and the age old conflicts there. Will it be too late for Kale or will those that love him be able to pull him out in time?

I was approached by the author to give a review in exchange for a copy of the book, otherwise I don’t think I’d have ever come across it in my book searches! (mainly because I haunt the new release sections these days…)

This story was slow to start and not as smooth as I’d like, to be honest; things often seemed to happen suddenly and without warning and I get confused easily. Also there was the minor element of A LOVE TRIANGLE!!!!!
However, once it got going, it got going! I’m still pretty confused about what was actually going on (this wasn’t the retelling of a fairytale I started to assume it was a few chapters in so I may have missed something here) and which story was the true history of the tower inhabitants, also I think a few points weren’t addressed in the wrap up at the end that I had been hoping would be, but the Epilogue was cute so I don’t care.

Starting in Ireland and travelling all around the world, you can be forgiven for imagining this story to be set in another world. (at least, I hope you can. ‘Cause I did.) The story lets you dip your toes into the lives of so many different types of people until you land upon a mystery plane (at least, I hope it was a mystery, otherwise my geography is worse than I thought) housing an intimidating tower and it’s swarm of fearsome dragons. This is the land our unassuming hero finds himself bound to. (Though a part of me cant help but think he sort of deserved it for being such an idiot)
I have to say though, Aoife came across as more reckless than strong, she didn’t seem to consider her actions at all and her reasons to be storming after Kale seemed a bit odd. But she was a determined individual and wasn’t going to let the men have all the fun and glory! Quite right too. Also, she really needed to have a conversation with Kale….
But perhaps in the end my favourite was Naguset ( though I could have sworn when we first met her she was a crone…)
It would have been nice to have heard a bit more about her people too. There’s a whole culture there that would have been interesting to visit.

Though it took me a while to get into, it certainly kept me with it until we stormed the tower and returned to the respective homelands…
Definitely worth a read for fans of far flung adventures and strong characters. And did I mention the dragons…?