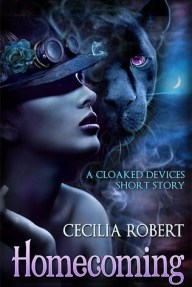 Thank you to the YA/NA Fanatics group for their read and review scheme, which gave me the opportunity to get a copy of this and to Cecilia Roberts for providing the copy.

Homecoming isn’t a full length novel, only a novella, and is a prequel to a new paranormal romance series Cloaked Devices. It came with a mature content warning so with this in mind I expected a short, sweet and VERY sexy short story.

Sera Czedar is a 23 year old runaway Panther Shifter. She abandoned her mate 5 years ago in the middle of their mating ceremony. She has built a new life for herself in Varselles, the city of Outcasts. But her Mate Levian Grayson has been looking for his missing Bride and he’s so close to finding her hiding place. Will he be able to persuade Sera back to his side and into his bed or will the real reasons Sera left come out and ruin any chance the couple have of a reunion?

Bring on the sexual tension!!! Doesn’t this sound like the best basis for a steamy romance? I thought YES GREAT… but I found myself afterwards feeling a little disappointed. Not that this was a bad novella! I must make that clear…it just wasn’t what I expected. Let me try to explain…. I thought I was going to get a steamy, not too much thinking, sex filled novella, but this had so much more intricacy! Cecilia Roberts creates a dystopian/paranormal world hybrid for her story to take place in. The idea being that the world we live in now gets torn apart by a plague that annihilates most of the human population, the only cure was to combine human blood with Shifter blood. Creating Human hybrids that can control the elements. Shifters however control the world and this story follows the romance between two Panther Shifters. There is A LOT more background information, and it is interesting don’t worry, I just don’t want to spoil it for you by telling you all about it when you could just read it yourself. I guess I just didn’t expect sooo much from such a short story!

Anyway, Homecoming leads the way into what I hope is a very promising new paranormal series. My rating however had to mirror my slight disappointment at not having as much raunchiness as I would have hoped…(there is some – but not a lot) and also because, while it was packed full of interesting world building, there wasn’t that much in the way of storyline progression. But I will be looking out for the first book in the series to see what happens next…