By Lisa Henry and Heidi Belleau

PLEASE NOTE: This post comes with a trigger warning. This book contains scenes of sex slavery and therefore rape. 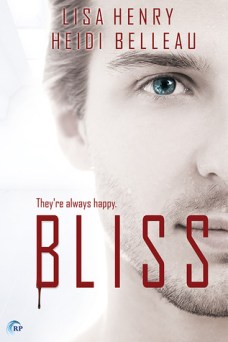 Rory James is in. He’s worked hard all his life and has finally earned the chance to become a citizen of the utopian Beulah, a country located next to his own. No crime, or pollution. A house, food for everyone. No prisons, no need of prisons.
Tate Patterson is out. Also from the neighbouring country he snuck into Beulah as a thief and is now on his way out.
When their worlds collide it will turn them both upside down. Tate will be entered into Beulah’s Rehabilitation through Restitution program and Rory will be his Sponsor. Tate will live and serve Rory for seven years to learn the human face of his crimes.
But it is all too good to be true. Tate has a chip in his head. A chip that makes him eager to please in any way possible. Commanded to never tell anyone about the chip, he is locked within his own mind and at the mercy of those around him and he can’t be anything but happy about it. He can’t even think about telling Rory, the one person who might just be able to save him.

This book was a lot darker and a lot more graphic than I was expecting. It wasn’t like I was expecting everything to be sunny and happy go lucky with the words “Locked inside his own mind” but I didn’t expect the sheer magnitude of the shock factor involved.
Nowhere did I see that this was what is dubed a ‘non-con’ story (for those who don’t like to call it as it is: rape), nor any notes that it was for older readers) To be fair, I didn’t search through reviews or anything, but then it should be within the book description.

I expected this to be our average dysctopian-hidden-under-utopia kind of book, only with two male leads and I am rather deeply disappointed that it wasn’t. As a friend of mine said on an unrelated topic (but which is totally applicable here), ‘We get to see a male/female relationship grow and develop, why don’t we get that with a male/male one? It seems all their scenes are graphic.’ And so, it seems, are the books.

Onto the story itself.  I’m not sure where I stand with this, I don’t want to pull it apart too much because I never like doing that and I liked the ending, but at the same time my brain offers up the phrase ‘Stockholm Syndrome’.

Rory was almost convinced that something was wrong, but how can you save someone who has been commanded to make you think they dont need saving? He was new and I think that hindered his ability to work out that yes something was definitely up. I also think that, in the end he chose the right option, though it almost failed. It helped. But honestly, he was living in denial. He got a good look at himself at the end, and though I think he was also too harsh, he was faced with the reality of how close that kind of thing can be.
I do wonder how (oops spoilers) actually thought he’d get away with it all. Obviously he was drunk on his own power, but he was getting super sloppy.

The worst thing? That I’m not that horrified. I can see this plausibly happening, this abuse of power (After all it so very nearly happens already. What difference does the chip make truly). I really have little faith in the collective of our kind.