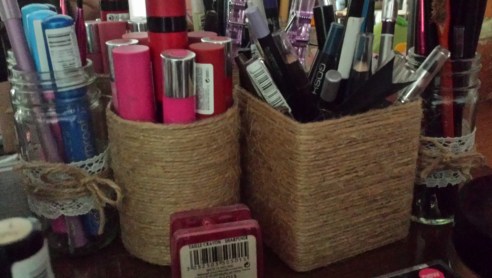 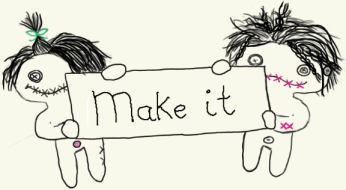 I don’t think I gained inspiration for these from any one place. I was tired of my excessive make up collection being all over the place so I decided to fix it!

I took two spice jars, a round plastic tub and a square plastic tub, some double sided sticky tape, a tiny bit of glue, gardening twine and some lace ribbony type stuff I had in a draw and hey presto! pretty stuff.

To make the lacy jars:

I cut the lace to the right length and stuck one edge to the jar, wrapping it around till the other end overlapped the first, (due to the holes in the fabric one strip of sticky tape seemed to be enough) I stuck the edges down with glue, then I measured the string to wrap around three times and tie a bow. Once I cut it to size I cut another for the next jar. I believe I guled the first layer of string down so that it wouldn’t move, but if you were to put a strip of sticky tape under the lace where you want to have the string I’m sure it would stick them both. I then tied the bow and cut off the excess.

To make the string wrapped tubs:

I put strips of double sided tape on either side of every corner on the square one and at regular intervals around the round one, from top to bottom, the opposite way the string will go. I didn’t peel off the top layer all the way, but pulled it up as I progressed so that I didn’t stick to it and the tape didn’t lose it’s tackiness, then basically I wrapped the string around it tightly, making sure it stuck to every piece of tape it crossed. I covered the ends in glue.