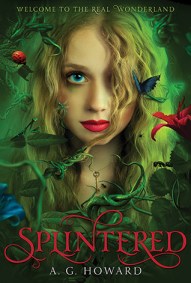 “Tearing down the rest of the world won’t make you happy. Look inside yourself. Because finding who you’re meant to be? What you were put on this world to do? That’s what fills the emptiness. It’s the only thing that can.” – page 368

Prepare to leave the wonderland you know behind…
Alyssa Gardner hears the whispers of bugs and flowers. She knows it’s only a matter of time before she’s committed to the asylum right alongside her mother. But the trick to not being caught, is not to talk back which is a trick that has worked for her for many years. But madness runs in her family, right back to her great-great-grandmother, Alice Liddell, the real life inspiration for Lewis Carroll’s Alice in wonderland.
But when visiting her mother she hears the same things her mother does, she cant help but think that there’s more to the madness than meets the eye and discovers the truth about the mess Alice left behind; it needs to be put right for her family to be left in peace. As long buried memories reawaken, Alyssa must track down Morpheus, the ones to guide her in her young dreams and let him guide her through the perilous world. But she accidentally brings eb along for the ride, her friend and the guy she’s been in love with since he moved in next door…

My opinion of this book has see-sawed all over the place. At one point I even quite convincingly hated it, I almost loved it in the middle and towards the end, I knew I wouldn’t be reading the rest of the series and found it  easy to ignore two of the most annoying factors.
Firstly; Cockney. Just, FYI, not sure this accent exists much anymore. Living in the UK, no one I know from London speaks like this…and every single ‘luv’ grated on my nerves, if it had been spelt correctly I wouldn’t have minded. I was once reading a feed and someone had written in their accent, ‘Sorry but it’s the way I speak’ they added. No. How you speak doesn’t change the way the word is spelt when you come to write it. (unless you’re dyslexic and spell phonetically, but they made no mention of this). This is an annoying stereotype that needs to go away. Dick Van Dyke has a lot to answer for. As does James Masters (Spike from Buffy, though I always thought he was from Manchester).

Back to the topic at hand. I do have one question, if their line came from a love child AND if her mother grew up in foster homes with no relatives around how on earth did they know their family line went back to Alice?!

Secondly: LOVE TRIANGLE ALERT!!!!! The worse kind.  DISLIKE! Not even going to delve into this.
Aside from these annoyingly prominent  plot points, it was all rather clever. The what and the who. The how and the why, though she seemed more a branch of Goth in her attire rather than Skater, but the outfits seemed reminisant of Tim Burtons’ Alice and quite enjoyable, aside for the colour combinations…
And I’m pretty happy with the wrap up. It can be read as a standalone which I intend to leave it at, mainly because the blurb for the next one delves into love triangles again.

I am disappointed that the Hatter didn’t have much of a role. I do enjoy a good mad.