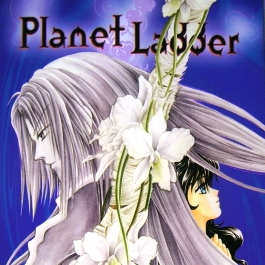 Sorry, just a quick one tonight guys. Pressure is on at work!! Haha. Today is the very first full manga I bought! I still own it too.

Planet Ladder is a manga about a teenage girl, Kaguya Haruyama who has lived with a Japanese foster family since she was found as an abandoned, amnesiac four-year-old. One night her world is turned upside down when two men—Idou, a monk, and Seeu, an emotionless prince—appear in her home and fight over her. Gold, Seeu’s robot, brings her to a world parallel to Earth on Seeu’s orders. It is believed Kaguya is the “Girl of Ananai”, destined to save only one of the nine parallel worlds from collision. Ancient, the first civilized world that was mysteriously destroyed; Asu, Seeu’s disintegrated world; Eden, present-day Earth; Telene, a small world allied with Geo; Fifth World, a politically neutral world; Geus, a peaceful world under the control of Geo; Geo, the most powerful of the worlds; Asuraitsu, Geo’s rival; and the Ninth World, destroyed before the start of the series.
As she learns more about each world, Kaguya refuses to save just one, but Geo dislikes this and starts an inter-world war, determined to survive.  Can Kaguya and her friends prevent the collision between worlds?

I don’t remember much about the storyline of this one ( I had to read up on it on wiki!), but when I considered a Manga Throwback, I had to start with the first, I hope to re-read it when I get some time. There are 7 books telling the story and it is a little odd (there’s a guy stuck in the body of a giant [robot?] rooster), but then it’s Japanese and at least it doesn’t have a sad ending! I would say I was mid-teens when I got this, I thought the drawings were so beautiful! It’s the only one from that I’ve kept through each cull, though I haven’t red it since. I guess by now it’s sentimental, but I’m sure when I read it I’ll love it all over again.