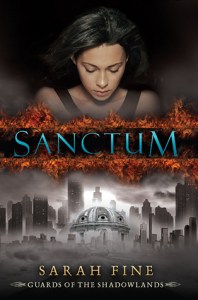 ‘ “Are you telling me you arrived in the Countryside and chose to come into the city? To rescue your friend?” He sounded completely baffled.
I clenched my teeth. “I have to find her. It’s the only reason I’m here.” ‘

*I read this as part of a buddy-read scheme hosted by the David Estes Fans and YA Book Lovers Unite! Group*

A week ago, seventeen-year-old Lela Santos’s best friend, Nadia, killed herself. Today, thanks to a farewell ritual gone awry, Lela is standing in paradise, looking upon a vast gated city in the distance—hell. No one willingly walks through the Suicide Gates, into a place smothered in darkness and infested with depraved creatures. But Lela isn’t just anyone—she’s determined to save her best friend’s soul, even if it means sacrificing her eternal afterlife.

As Lela struggles to find Nadia, she’s captured by the Guards, enormous, not-quite-human creatures that patrol the dark city’s endless streets. Their all-too-human leader, Malachi, is unlike them in every way except one: his deadly efficiency. When he meets Lela, Malachi forms his own plan: get her out of the city, even if it means she must leave Nadia behind. Malachi knows something Lela doesn’t—the dark city isn’t the worst place Lela could end up, and he will stop at nothing to keep her from that fate.

Sarah Fine’s tackles some very difficult areas within Sanctum. One of which being ‘What happens to you when you die? And, does it matter how you die?’ In Sanctum, it does matter. If you die of natural causes or unavoidable/accidental death but have lead a reasonable good life, you go to the Countryside, a beautiful and sunny field where all your troubles melt away and you live out eternity in bliss. If however you commit suicide you find yourself facing the gates of a dark and misery filled city.

At first I was a little apprehensive with the whole Suicide-Purgatory concept, as it seemed so depressing that people who really hated their lives, and saw no other way out of their misery, would be punished in death with a just as miserable existence. But as you learn more about Sanctum you start to see that there is hope, but that these people have to come to realize it for themselves before help (and a way out) is offered to them.

The world building in Sanctum was amazing. So creepy and easy to visualize. (To me it was something like the world in Sin City – all greys, blacks and whites). There were some ridiculously scary bits… THE TOWER… for example is a place I never ever want to find myself.

One of the parts that was disappointing for me was the romance. It was a little cliched and obvious however I liked it more towards the end of the book when it started to feel a little less forced. The characters themselves were interesting. I loved Malachi and Ana (the guards) and I liked that there was a couple of ‘Archangels’ scattered in. Michael, cracked me up. The one I truly didn’t get was Nadia. I think a little more of Nadia and Lela’s friendship at the beginning may have changed my feelings about her, but as it stands, I found her really infuriating, self-absorbed and totally not worth the hassle.

The Mazikin’s, as bad guys go, where interesting. I think this is one of the reasons I want to pick up book 2, as I felt there was a lack of explanation as to what they really are. What did they really want and why? Overall, I am excited by Sarah Fine’s debut novel and look forward to reading more by her.