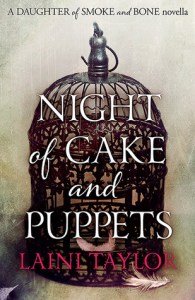 In Night of Cake & Puppets, Taylor brings to life a night only hinted at in the Daughter of Smoke & Bone trilogy—the magical first date of fan-favorites Zuzana and Mik. Told in alternating perspectives, it’s the perfect love story for fans of the series and new readers alike. Petite though she may be, Zuzana is not known for timidity. Her best friend, Karou, calls her “rabid fairy,” her “voodoo eyes” are said to freeze blood, and even her older brother fears her wrath. But when it comes to the simple matter of talking to Mik, or “Violin Boy,” her courage deserts her. Now, enough is enough. Zuzana is determined to meet him, and she has a fistful of magic and a plan. It’s a wonderfully elaborate treasure hunt of a plan that will take Mik all over Prague on a cold winter’s night before finally leading him to the treasure: herself! Violin Boy’s not going to know what hit him

I just can’t get enough of this series. I was so sad when I finished Dreams of Gods and Monsters. I fell completely and utterly in love with Laini Taylor’s writing and ability to create such an amazing world. She broke my heart into tiny little pieces, over and over again and yet I still found myself wanting more! When I picked up this novella, my thoughts were… this is it, when you finish this, it really is… truly… the end. So it was with great trepidation that I began this.

Night of Cake and Puppets was a beautiful little peak into the romance that blossomed between two of the secondary characters from the series, Zuzanna and Mik, and I am so glad I got to read it. Separated from the drama and the heart-break that the main characters were experiencing, it was nice to think that this magical romance was happening at the same time. Zuzanna uses the magical scuppies (given to her by Karou) to create one magical night that will win her Mik’s heart forever. And I must say, at the same time she managed to woow me too. I love that she always seemed so feisty and clever on the outside and yet, inside she was just as uncertain as everyone else. I loved that Mik was so open to everything that occurred and that he even attempted to join in. I’m usually disappointed with Novellas, (because they’re so short and never seem to get enough in) but this one was spot on. It managed to fit so much in!

Overall I wish there was more… I don’t think I will ever be able to love a series as much as this one… It has captured my heart.