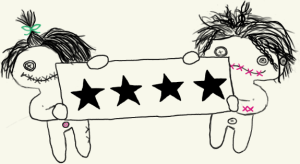 He’s the boss. She’s the intern.
Nothing can happen. It’s against the company rules.

Then again, some rules were made to be broken.

What starts as innocent flirting becomes raveled up into so much more—secrets, lies, deceit.

Sooo, where to start. I picked up Volume 1 as a free download on Amazon. As I’ve said many times before, I’m not overly keen on novellas as I find them lacking substance, but I was surprised by this one. Yes there was a lot of sex and at some points it over ran the rest of the story but I found that underneath there was a glimmer of a storyline.

I was annoyed that this came in 3 volumes. It should have been one novel not 3 short novellas. It was literally one book that had been cut, irritatingly, at the most interesting points forcing you to have to get the next part. There was no reintroduction so if you have volume 2 and not volume 1, don’t bother reading it, it will read like you have picked up a book and started reading in the middle (which you basically have done). I can only presume that Brooke Cumberland didn’t have enough confidence in her own book to publish it as A BOOK and opted for cutting it up so as to draw the reader in with the beginning and then get them to pay for the rest of the book. On the one hand this was really annoying but then I think, well I wouldn’t necessarily have bought the book just from the description and the cover so perhaps its allowable but maybe I would have thought about releasing it as a book and doing a free sample instead of this!

Anyway, the more important bit is the story. There are bits that could have been improved, such as more detail into the mystery of how Cecilia’s dad died but overall I really enjoyed it especially the build up of the relationship between Cecilia and Bentley.

Volume 1 built up all the sexual tension, and it was sizzling! So much want and desire, it was great. At the very end it starts to get very heated and its only in Volume 2 when it all starts to get properly HOT!

The sex was good, it wasn’t as cliched as other short romance novels, Brooke had obviously put a lot of thought into it which was great. I didn’t even realise we’d completely lost the mystery aspect of the story (as it was that good) until it was brought back up again towards the end of Volume 2 around about the time the romance suffers the oh so obvious set back (you know when all the lies are revealed and everyone falls out with each other).

Volume 3 took on a completely different tacked as it spreads itself over a few years, (yes we suffer the lose of their relationship for YEARS!!!) thankfully its only a few pages to us but its still sad. And then all the secrets are finally shared. I found by the end of it I didn’t really care what had happened to her dad which was a shame as at the beginning it gave a really interesting dynamic to this romance.

It was a good romance story, if predictable in places, it lacked a little bit on the mystery side though. I would recommend this (as a book – not a set) and I actually look forward to reading more from this Indie Author.