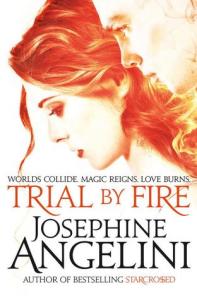 “The people who love you will guide you like bright lights into the other worlds.”

This world is trying to kill Lily Proctor. Her life-threatening allergies keep her from enjoying many of the experiences that other teenagers take for granted…which is why she is determined to enjoy her first (and perhaps only) high-school party. But Lily’s life never goes according to plan, and after a humiliating incident in front of half her graduating class Lily wishes she could just disappear.

Suddenly Lily is in a different Salem – one overrun with horrifying creatures and ruled by powerful women called Crucibles. Strongest and cruellest of all the Crucibles is Lillian . . . Lily’s identical other self in this alternate universe. This new version of her world is terrifyingly sensual, and Lily is soon overwhelmed by new experiences.

Lily realizes that what makes her weak at home is exactly what makes her extraordinary in New Salem. It also puts her life in danger. Thrown into a world she doesn’t understand, Lily is torn between responsibilities she can’t hope to shoulder alone, and a love she never expected.

But how can Lily be the saviour of this world when she is literally her own worst enemy?

Trial by Fire has me completely torn. There were soooo many (and I mean MANY) things that annoyed me about this book and yet when I finished, I found my self strangely liking it.

WARNING this may end up as just a ranting list of things that annoyed me!

So Lily (in her world) is a sickly young girl who has no experience in life, at all, because she is basically allergic to EVERYTHING! Dust, Smoke, chemicals, air… you name it she’s got it. She’s a vegan and a (sort of) Green peace activist. And her best friend is one of the hottest guys in school (SOME HOW – don’t ask me how – I still don’t understand) who just happens to turns out to have slept with most/all of the girls at school… but somehow he’s suddenly showing interest in her and wants to be with her… but that’s ok cos he loves her and would never treat her badly. WRONG, so Tristan turns out to be a complete douchebag (what a shocker) and it all ends up with Lily at a party having her drink laced with alcohol (which she’s allergic too – No how can that be??? oh yes she’s allergic to EVERYTHING) and having a fit in front of her whole school class.

When everything goes wrong, Lily finds herself wishing she could just disappear and forget everything. Cue – voice in her head… offering her a way out. Which she agrees too. She wakes up still in Salem but in a Salem that is completely different to her world. Now this is the bit that I really enjoyed. The world was interesting, a mix of old fortification and modern skyscrapers. It could have done with a little more explaining and description but what was there was good. I was fascinated by the idea that witches magic had created a cleaner, more natural civilisation. The problem as always, was that only some had power and only witches had enough power to do life changing magic. And of course with some holding all the cards, it becomes all about money and many suffered because they didn’t conform to the ideals of those in power.

“Witches were much more efficient at tackling the challenges of biology, chemistry, and physics, so why even try to be a scientist?” 60%

Lily was called to this world by her identical self Lillian who turns out to be the most powerful of all the witches and also the cruellest. I found her reasoning for being how she was very unreasonable and rather infuriating. And if she loved Rowan then why didn’t she come up with another plan? One that coursed him less pain?

One thing that really got under my skin towards the end was that all the witches (female of course) didn’t seem to support each other, but instead worked together when it suited them and spent the rest of the time trying to over through one another. The witches seemed to want to CLAIM men left right and centre and surround themselves with MALE mechanics. At first I thought it was because only men could store large amounts of power, but we find later that Dana (a female) can do this too soooo why does it have to be men? To me it seems more about attraction and control of the men and I found that a little repulsive.

I didn’t really enjoy the romance between Lily and Rowan. It seemed a little unnecessary and it sadly took over a large section of this book and slowed the whole thing down to a plodding pace. Lily had no backbone for most of this book, and even though she said she doesn’t trust Rowan, seemed to rely on him an awful lot! She was your typical wimpy girl until the end where she seemed to come into some kind of self-power but only because she loved Rowan so much. I found the friendship between her, Tristan (of magic Salem) and Caleb more genuine.

I know it seems really odd, but even with all these annoyances I found that by the end of it I really did enjoy the book. I think the last 10-15% saved it. I don’t know how, but I think the overall idea, the little details, like fire and spirit-walking, the sharing of magic between witches and mechanics, the world it was set in and the political aspects of this novel just seemed to pull it back from the brink of being an overly irritating paranormal romance.

More magic and world building in the next book please. Pull back a bit from the romance.