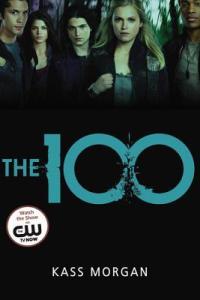 “That was the thing about secrets – you had to carry them with you forever, no matter what the cost.”

Ever since a devastating nuclear war, humanity has lived on spaceships far above Earth’s radioactive surface. Now, one hundred juvenile delinquents — considered expendable by society — are being sent on a dangerous mission: to recolonize the planet. It could be their second chance at life…or it could be a suicide mission.

CLARKE was arrested for treason, though she’s haunted by the memory of what she really did. WELLS, the chancellor’s son, came to Earth for the girl he loves — but will she ever forgive him? Reckless BELLAMY fought his way onto the transport pod to protect his sister, the other half of the only pair of siblings in the universe. And GLASS managed to escape back onto the ship, only to find that life there is just as dangerous as she feared it would be on Earth.

Confronted with a savage land and haunted by secrets from their pasts, the hundred must fight to survive. They were never meant to be heroes, but they may be mankind’s last hope.

I’d normally shy away from a book that I’d already seen the screen version of first, just because I always feel the book is sooo slow in comparison (mainly because I know what’s going to happen). I’m an avid fan of the new TV series (on e4 in the UK), and yet I was pleasantly surprised, I really enjoyed this book!

Yes, of course I began the book constantly comparing it to the TV adaptation and grumbling about the differences. It took me a while to get my head around the character changes, such as Bellamy in the book is more like Finn (and there is no Finn), Well’s is a very important character, Clarke’s parents are both dead in the book, and there is a character called Glass that doesn’t exist in the TV series and yet is so important to the book that she gets her own POV chapters.

But anyway this isn’t a comparison review this is a book review, so how was the book?

This was a very enjoyable science fiction story that follows four main characters, from their own POV. I personally found, that each character’s voice came across differently in their own chapter but I don’t know whether that was because of the writing itself or because of the differences in storyline.

How can you not tell? I hear you say… Well this was hard to tell because the book actually only covered a very short period of time and all four of these characters had very little interaction with each other. At this stage it was mainly inner monologues about feelings of regret… which tended to result in a flashback to a memory. This would usually annoy me but I actually found this was handled well, with interesting details, that slowly built up how each of the characters ended up in the position they were in.

I think my favourite storyline was Glass’s and I think it may be because she is completely new to me (as she doesn’t exist in the tv series). I just loved her romance and I felt so sorry for her when the truth came out. I loved the insight it gave you into the social classes and political rules of the Station.

Overall, I found this captured my full attention from start to finish but I thought that it was just cut short! The action had only just begun when it ended! I can see why this was chosen to be the next big tv series as it showed a lot of screen potential. As the tv series has rushed so far ahead, it will be interesting to see where the next book takes us next, in comparison.