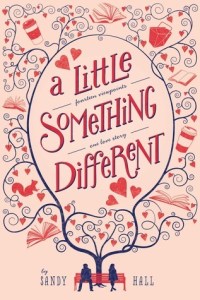 ‘ “You should probably converse.”
“Maybe. Could also be fun to like her from afar and make up stories about her in my head and pretend that we’re dating.” Location 199 (Page 18) ‘

The creative writing teacher, the delivery guy, the local Starbucks baristas, his best friend, her roommate, and the squirrel in the park all have one thing in common—they believe that Gabe and Lea should get together. Lea and Gabe are in the same creative writing class. They get the same pop culture references, order the same Chinese food, and hang out in the same places. Unfortunately, Lea is reserved, Gabe has issues, and despite their initial mutual crush, it looks like they are never going to work things out.  But somehow even when nothing is going on, something is happening between them, and everyone can see it. Their creative writing teacher pushes them together. The baristas at Starbucks watch their relationship like a TV show. Their bus driver tells his wife about them. The waitress at the diner automatically seats them together. Even the squirrel who lives on the college green believes in their relationship.

Surely Gabe and Lea will figure out that they are meant to be together….

This was so ridiculously cute that it’s very hard to say anything but nice things about it!

This is a beautiful little love story between two people – Gabe, the extremely shy and mysterious guy, and Lea, a quiet and not very confident girl. It’s a slow built romance and makes you smile from ear to ear.

Like the title says this is ‘a little something different’. While the storyline is a typical teenage romance, the way it is told is totally unique.

The whole story is told from 14 different points of view (none of which are actually the two main characters). This adorable love story is slowly revealed through the eyes of observers, from the best friend, to the barista at starbucks, to the bench in the playing field… yes that’s right, you hear parts of the story from the point of view of an inanimate object! I found this a little TOO quirky at the start and thought, surely this will not work but, by the end of it, I thought it was a cleverly employed addition, that wasn’t too heavily used.

Sandy Hall obviously has a good sense of humour which shone through in many of her characters. I have read many multiple POV books recently and usually I find characters start to blend in together. Surprisingly even with 14 different POVs I didn’t find that with A Little Something Different. And that was very refreshing. I liked that not all of the characters were happy with the blossoming romance, and while some were encouraging it and trying to enable it, others were happy to watch things go wrong for the happy couple. But by the end everyone was routing for them.

I think the only problem I had was that while it was delightfully cute! I felt it did drag on a bit towards the end and because we were always seeing the relationship from the outside I felt as though I never truly got to connect with the main characters. This method did help make the mystery surrounding Gabe’s past more interesting but I wished the secret had been a little bit more… dramatic.

Overall a cute and very clever debut from Sandy Hall and I can’t wait to see what she has planned next!

Note: a copy was provided courtesy of Macmillan Childrens Books, through Netgalley, in exchange for an honest review. No compensation was given or taken during this process.