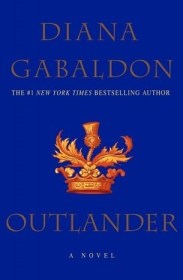 “I still say the only good weapon for a woman is poison.”
“Perhaps, but it has it’s deficiencies in face-to-face combat.” – 39%

Claire Randall, a former combat nurse, heads to Scotland with her husband for a second honeymoon so that they can reacquaint themselves with each other years spent apart during the war. One day she stops off at the standing stones to look at a curious plant, only to inadvertently find herself in 1743.
Rescued from an uncertain fate by a clansman she is thrown into clan life and viewed suspiciously by everyone around her for nothing more than being an outlander, a Sassenach in a Scotland torn by war. Everyone that is except for the young Jamie, the clansman she spent most of the journey from the stones to their castle patching up. Her only friend within the castle, Claire fights her attraction to him, determined to remain faithful to a husband not yet born. But what happens when your enemy wears the same face as your husband? As the months pass, Claire’s fight to get back to 1945 seems to be more and more pointless…

I have come late to the Outlander party. I have to admit when I first came across the book a few years ago, I immediately cast it away because, let’s face it, the whole thing is about a love triangle. But I watched the TV show on the internet and was immediately desperate to know what happened next. I was pleased to see that the series seems to have stuck as close as possible to the book so far, though I do wonder how much of the next part they’ll miss out. But this is about the book, not the show.
I found it heavy mainly for the fact that it was so long! As a kindle book, I had no concept of size and it just kept going on and on! I was so relieved to reach the end, but found it raised more questions than it answered. I know some of the future storyline from quotes on pinterest, so finding out what happens at the end of this book has confused me greatly as there are 7 or 8 others to go!
I thought I may need a break after this book, but I find myself thinking of it often and the mystery of it all is getting to me. I may have to read the next one sooner than I’d planned!
I found none of this book fell under stereotypical romance novel clichés (except for the triangle, again) and I loved how Claire and Jamie looked after each other. It wasn’t all Jamie’s responsibility.
On the whole I’m not disappointed I waited for the TV series before reading it as I think the visual helped me get over the parts I would have hated before and I was certainly 100% behind her choice!!