Top Ten Tuesday is a weekly feature hosted by The Broke and the Bookish that other bloggers are welcome to join in, to create Top Ten lists on varying topics. This week it’s our top ten new series we want to start.

It’s superposed to be series from the last two years, but I have a habit of reading the more recent ones on my lists and I may have read them all, but I’ll try…

1 The Star Thief by Jamie Grey 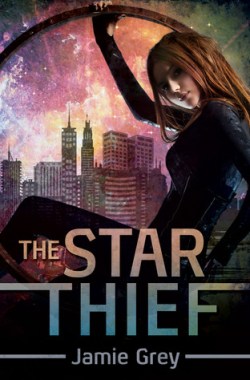 Something of a Guardians of the Galaxy/ Firefly feel to this one and that’s just amazing!

2 A Thousand Pieces of You by Claudia Gray 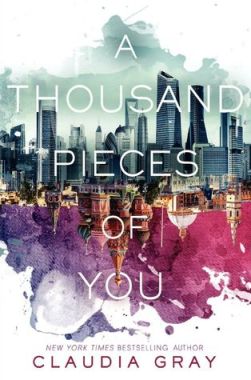 Marguerite Caine’s physicist parents are known for their radical scientific achievements. Their most astonishing invention: the Firebird, which allows users to jump into parallel universes, some vastly altered from our own. But when Marguerite’s father is murdered, the killer—her parent’s handsome and enigmatic assistant Paul—escapes into another dimension before the law can touch him.

Marguerite can’t let the man who destroyed her family go free, and she races after Paul through different universes, where their lives entangle in increasingly familiar ways. With each encounter she begins to question Paul’s guilt—and her own heart. Soon she discovers the truth behind her father’s death is more sinister than she ever could have imagined.

A Thousand Pieces of You explores a reality where we witness the countless other lives we might lead in an amazingly intricate multiverse and ask whether, amid infinite possibilities, one love can endure.

Just look at that cover! Plus there’s some sort of time travel going on here.

3 The Orphan Queen by Jodi Meadows 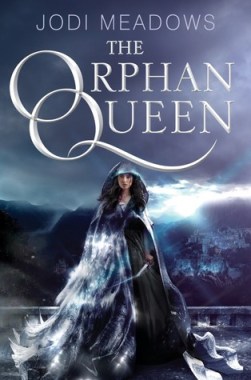 Wilhelmina has a hundred identities.

She is a princess. When the Indigo Kingdom conquered her homeland, Wilhelmina and other orphaned children of nobility were taken to Skyvale, the Indigo Kingdom’s capital. Ten years later, they are the Ospreys, experts at stealth and theft. With them, Wilhelmina means to take back her throne.

She is a spy. Wil and her best friend, Melanie, infiltrate Skyvale Palace to study their foes. They assume the identities of nobles from a wraith-fallen kingdom, but enemies fill the palace, and Melanie’s behavior grows suspicious. With Osprey missions becoming increasingly dangerous and their leader more unstable, Wil can’t trust anyone.

She is a threat. Wraith is the toxic by-product of magic, and for a century using magic has been forbidden. Still the wraith pours across the continent, reshaping the land and animals into fresh horrors. Soon it will reach the Indigo Kingdom. Wilhelmina’s magic might be the key to stopping the wraith, but if the vigilante Black Knife discovers Wil’s magic, she will vanish like all the others

Jodi Meadows introduces a vivid new fantasy full of intrigue, romance, dangerous magic, and one girl’s battle to reclaim her place in the world.

Strong female leader, fighting to get her kingdom back, espionage and magic. So many of my favourite things! 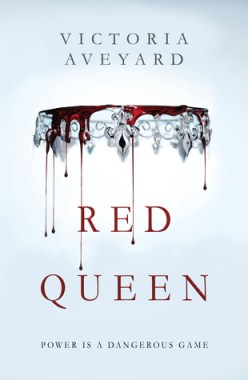 The poverty stricken Reds are commoners, living under the rule of the Silvers, elite warriors with god-like powers.

To Mare Barrow, a 17-year-old Red girl from The Stilts, it looks like nothing will ever change.

Mare finds herself working in the Silver Palace, at the centre of
those she hates the most. She quickly discovers that, despite her red blood, she possesses a deadly power of her own. One that threatens to destroy Silver control.

But power is a dangerous game. And in this world divided by blood, who will win?

We aren’t given much information on this one, I’m suitably intrigued. Also, pretty cover alert! 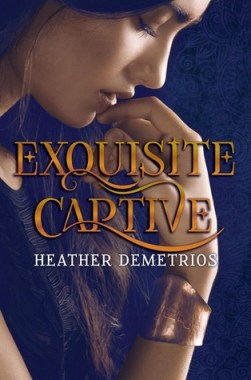 Forced to obey her master. Compelled to help her enemy.
Determined to free herself.

Nalia is a jinni of tremendous ancient power, the only survivor of a coup that killed nearly everyone she loved. Stuffed into a bottle and sold by a slave trader, she’s now in hiding on the dark caravan, the lucrative jinni slave trade between Arjinna and Earth, where jinn are forced to grant wishes and obey their human masters’ every command. She’d give almost anything to be free of the golden shackles that bind her to Malek, her handsome, cruel master, and his lavish Hollywood lifestyle.

Enter Raif, the enigmatic leader of Arjinna’s revolution and Nalia’s sworn enemy. He promises to free Nalia from her master so that she can return to her ravaged homeland and free her imprisoned brother—all for an unbearably high price. Nalia’s not sure she can trust him, but Raif’s her only hope of escape. With her enemies on the hunt, Earth has become more perilous than ever for Nalia. There’s just one catch: for Raif’s unbinding magic to work, Nalia must gain possession of her bottle…and convince the dangerously persuasive Malek that she truly loves him. Battling a dark past and harboring a terrible secret, Nalia soon realizes her freedom may come at a price too terrible to pay: but how far is she willing to go for it?

Have this one waiting on my Kindle. Haven’t read nearly enough stories about Jinni’s. Or…any books, actually.

6 A Court of Thorns and Roses by Sarah J. Maas 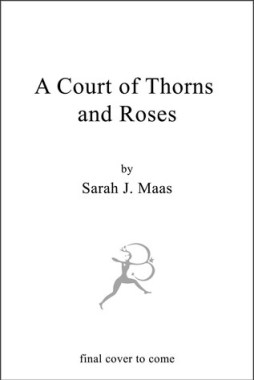 When nineteen-year-old Feyre plucks a forbidden rose from the ground, a wolfish creature arrives to punish her for it. Dragged to a treacherous magical land she only knows about from stories, Feyre discovers that her captor is not an animal, but Tamlin, a High Lord of the faeries. And as she learns more about him, her feelings for Tamlin transform from hostility to a fiery passion. But the threats against the faerie lands are growing, and Feyre must fight to break an ancient curse . . . or lose Tamlin forever.

This first book in a new series from the New York Times bestselling author of the Throne of Glass series is salacious, action-packed, and impossible to put down!

What’s not to like? Except for the lack of cover art…Enjoyed what I’ve read of her other series, plus this involves Beauty and the Beast! 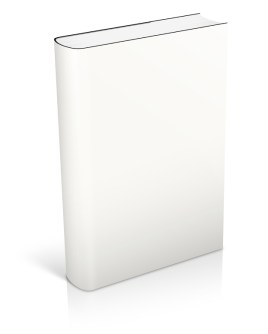 A prequel to “Alice in Wonderland,” HEARTLESS will tell the tale of how a marquis’ teenage daughter became the infamous Queen of Hearts. It will be a story of whimsy and madness, passion and tragedy, ravens and writing desks.

Terribly excited by this! It says prequel! Seems likely her next, as yet untitled series, may be ‘Alice in Wonderland’. BUT! 2016!!!!

8 Magic Under Glass by Jackies Dolamore 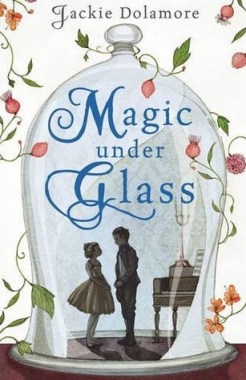 Nimira is a music-hall performer forced to dance for pennies to an audience of leering drunks. When wealthy sorcerer Hollin Parry hires her to do a special act – singing accompaniment to an exquisite piano-playing automaton, Nimira believes it is the start of a new life. In Parry’s world, however, buried secrets stir.
Unsettling below-stairs rumours abound about ghosts, a mad woman roaming the halls, and of Parry’s involvement in a gang of ruthless sorcerers who torture fairies for sport. When Nimira discovers the spirit of a dashing young fairy gentleman is trapped inside the automaton’s stiff limbs, waiting for someone to break the curse and set him free, the two fall in love. But it is a love set against a dreadful race against time to save the entire fairy realm, which is in mortal peril. 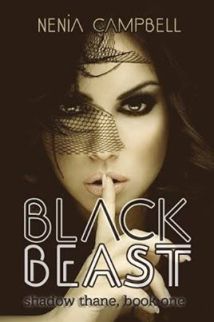 She walks the line between the hunter and the hunted. Vampires want her blood. Witches consider her less-than-human. Slayers simply want her dead.

As if being in high school wasn’t hard enough, Catherine Pierce has to deal with a whole other set of problems that arise from being a shifter that hasn’t settled. Because after puberty, shifters are supposed to stop changing–and Catherine, well, hasn’t.

Even among her own kind, Catherine is regarded as a freak.

To make matters worse, she’d caught the attention of the witches’ Council because they think she’s been dabbling in dark magic because of a stupid old book that popped up at her work. And she’s been having nightmares about a terrifying man who calls himself the Shadow Thane and plans to end the world in a burst of darkness and dragon fire.

Just in case that wasn’t enough, a branch of Slayers are infiltrating Catherine’s town, under the guise of a community youth group called Sterling Rep.

Times are changing and that means, for Catherine, it’s time to Change.

well, it sounds like a new take on shifters etc. Always enjoy a new perspective 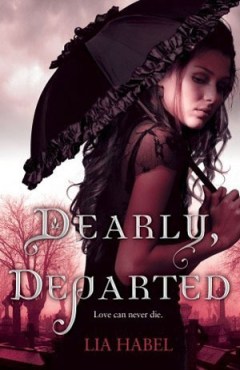 Love conquers all, so they say. But can Cupid’s arrow pierce the hearts of the living and the dead – or rather, the undead? Can a proper young Victorian lady find true love in the arms of a dashing zombie?

The year is 2195. The place is New Victoria – a high-tech nation modeled on the manners, mores, and fashions of an antique era. A teenager in high society, Nora Dearly is far more interested in military history and her country’s political unrest than in tea parties and debutante balls. But after her beloved parents die, Nora is left at the mercy of her domineering aunt, a social-climbing spendthrift who has squandered the family fortune and now plans to marry her niece off for money. For Nora, no fate could be more horrible – until she’s nearly kidnapped by an army of walking corpses.

But fate is just getting started with Nora. Catapulted from her world of drawing-room civility, she’s suddenly gunning down ravenous zombies alongside mysterious black-clad commandos and confronting “The Laz,” a fatal virus that raises the dead – and hell along with them. Hardly ideal circumstances. Then Nora meets Bram Griswold, a young soldier who is brave, handsome, noble . . . and dead. But as is the case with the rest of his special undead unit, luck and modern science have enabled Bram to hold on to his mind, his manners, and his body parts. And when his bond of trust with Nora turns to tenderness, there’s no turning back. Eventually, they know, the disease will win, separating the star-crossed lovers forever. But until then, beating or not, their hearts will have what they desire

Well, I read warm bodies, so this has to work some how, right? Total curiosity on this front.