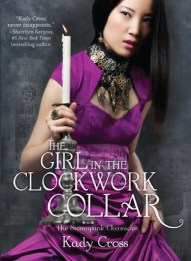 “There was something in his gaze that told her he liked how she looked in his clothes. It had to be a bloke thing, because she certainly wouldn’t want to see him wearing hers.” – Page 344

There’s no rest for Finley Jayne and her ‘straynge band of mysfits’. Right after saving the Empire they must dash off to save their friend Jasper. They follow him to America, his home land, to rescue him from the dastardly criminal forcing him to give up the device Jasper stole from him in exchange for the girl Jasper loves. One false move and the collar around Mei’s neck will tighten, taking her life.
All is not harmonious within the rest of the group however, both Griffin and Finley are battling their attraction to each other and they’re both just a little concerned with how much Finley seems to be enjoying her time undercover in the criminal underworld…just how far will they go for their friend?

One thing about this series I have to mention is, I’m pretty sure in another frame of mind I would have hated it. It seems to be aimed at a younger audience, certainly it’s more a book to introduce people to steampunk fiction, not for die-hard fans who have in depth knowledge of the Victorian Era and of all the ‘possible’ things that could possibly happen within this fictional time. That being said, I’m loving these books rather much. The characters are pretty un-complex, which, to be honest is sometimes such a blessing it’s ridiculous and so fat the love triangles have pretty much been nothing but circumstance and I’m hoping that it’s gonna stay that way.

There were a few more points within this book that were off. For example, within Victorian Society, you don’t insult the poxy little interfering madam whose father’s Gala you kinda need to get into, you just don’t. Cause, then suddenly you find yourself uninvited and your social acceptance suddenly dropped. They were delicate back then, the ‘nobility’. But right now I’m annoyed I have to wait AN ENTIRE DAY for the next book, even though my 48 hour wait is up and I’m back to work.