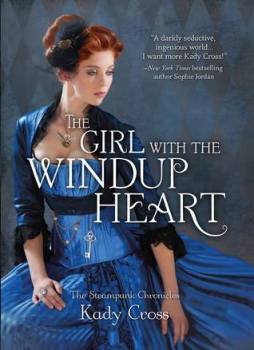 Finley Jayne is about to face the biggest fight of her life; the one for Griffin King’s life. Taken captive within the Aether, he is trapped within and inescapable prison, a construct of the Machinist. Here, he must stay strong, even as the life is leached from him, or risk the Machinist gaining access to his power and killing those he holds most dear. But Finley won’t let him struggle alone. Heading into the Aether the only way she knows how, by temporarily dying, she joins forces with the young man she loves. But there are other forces in the Aether and some of them are out for her blood, as she struggles with each temporary death, Griffin becomes less and less substantial, his own death is approaching and she needs all the help she can get.
Meanwhile, Jack has his own issues. Mila, the once automaton girl he’s been caring for, has left. In trying to give her the best he denied her himself and inadvertently broke her heart. Tracking her down and keeping her safe involves much time and skill, even the help of a few quick friends, but it will lead him deep within his own past, where a few surprises still wait for him.

Please note: some of this review will touch upon the whole series and some spoilers may be included.

Unfortunately Griffin wasn’t in this one much. Well, he was, but he wasn’t with the group. He was lost and alone and stuck somewhere else. And a little bit of an idiot of the truth be known. I was happy for Jack (and I enjoyed finding out his truth!) and sorry poor Jasper didn’t have much of a role in this one.
I’m really happy to have reached the end. I did enjoy my time with these characters but I do feel these are more teen books, the storyline, while twisty, is basic and the characters fall in love rather easily. They’re all young and hold high skills, situations are resolved somewhat quickly and little attention is paid to the customs of the time.

SPOILER: Much mention is made of reputations and how quickly someone can be dropped from society and yet, not one single one of them have mentioned marriage within their neat little couples. Not only would this be proper but it would also keep them all safe. I feel as though it was something purposefully unaddressed and truthfully I thought far less of Griffin and Sam for it. (Not Jack so much as he hasn’t had the same length of time, but he also goes one about reputation and the like) While it may not be something we agree with, it was the custom and expectation at the time this story is set and it’s absence is not only noticeable, but an error in judgement I feel.

Most noticeably within this book, it seemed that things were added as the story went along, as though back story was hastily added to give substance rather than having spent the time lingering within the background in a sinister manner. We suddenly had flashbacks which were certainly a good cover, and yet not quite enough to disguise it. (I feel bad because I’ve already said all the nice things and all that’s left are the less nice ones.)

I certainly enjoyed my time with these books and I’m glad I chose now to read them.