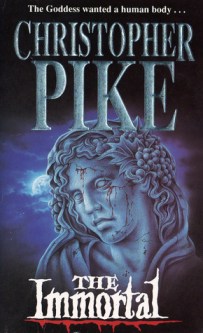 Christopher Pike’s books seem to come in one of two types, horror or spiritual.

At least, that’s the only way I can work out how to describe them. They either are like the point horror books or they touch on spirituality. This one is a spiritual one, it involves the Greek Gods:

Josie is on vacation in Greece with her friend, her father and his girlfriend. While visiting the sacred island of Delos, she stumbles upon a statue of a goddess. She takes it with her when she leaves the island. The trouble starts. The Goddess wants something from Josie she doesn’t want to give.

This is one of my favourites and though it’s designed as a horror story, it firmly sits within what I call spiritual elements. Not only does it touch on some of the Greek culture, but also on the myths and in the end, it expresses something I’ve always believed true; only those who feel they need to be judged will be.