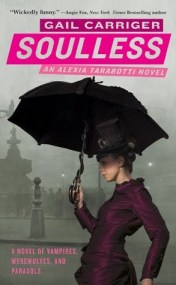 Alexia, he often felt, would adapt well to rough Scottish cold and rock and plaid. Was that the source of his facination? Alexia in plaid? His mind carried that image one ir two steps further, taking her out of the plaid and then on top of it.  - page 109

Alexia Tarabotti is laboring under a great many social tribulations.
First, she has no soul. Second, she’s a spinster whose father is both Italian and dead. Third, she was rudely attacked by a vampire, breaking all standards of social etiquette.
Where to go from there? From bad to worse apparently, for Alexia accidentally kills the vampire–and then the appalling Lord Maccon (loud, messy, gorgeous, and werewolf) is sent by Queen Victoria to investigate.
With unexpected vampires appearing and expected vampires disappearing, everyone seems to believe Alexia responsible. Can she figure out what is actually happening to London’s high society? Will her soulless ability to negate supernatural powers prove useful or just plain embarrassing? Finally, who is the real enemy, and do they have treacle tart?

So this was a re-read too. I forgot how much I’d enjoyed this book. Certainly love the interaction between Alexia and Lord Maccon! I am rather fond of them both. I’m not sure why I never continued the series, except I heard rumours of separation. By now you might have guessed how little this impresses me.
I would say this series, unlike Finishing School, is for an older audience, as I pondered before, perhaps an introduction for a younger audience as they grow? Definitely seems that way.

I like how unflappable Alexia is, in a time of horribly flappable women. However did she manage before she stumbled into daily life with Maccon? And how reasonable in the most unreasonable situations too. “Better send for tea.” “Yes, Quite.” (not a quote)
Another wonderful thing is her regularly mentioned real figure. Though, at the time I believe there were in actual fact very few overly skinny ladies, it’s not something people seem to realise. And it was rather amusing to see her scandalised family, who seemed to forget the effect the full moon would have had on the Lord and proceeded to be very scandalised indeed.

One thing was rather bothersome however. The mention of plaid. Since I’m pretty sure people weren’t wondering about in blankets or sashes, then I assume it was used in the American manner and therefore means tartan. Just to clear that up…